Thousands of young people converged on Boston’s City Hall Plaza on Friday morning to call for action to address climate change, in one of a series of “climate strikes” that have drawn crowds around the world.

High school students had been organizing the Boston rally for the past few months. The rallies come ahead of a United Nations climate summit in New York City.

After rallying, the demonstrators headed to the Massachusetts State House.

“If you leave here today and you meet up with a climate denier, I’m going to tell you how to handle that situation. You’re going to say three things,” McCarthy said as the crowd roared. “Number one, climate change is real. Manmade emissions have caused it. That’s why women need to rule the world.” 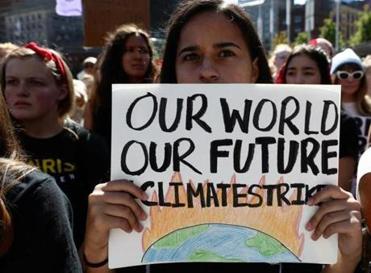 The climate strikers are waging the most important fight in human history — can they win?

The signature causes of a new generation, including this one, face long odds. Activists say they have a potent strategy: Hope.

“We’re going to make sure — where the federal government’s not helping us — the cities and towns across America are going to step up,” Walsh said to cheers.

The strike, organizers say, was inspired by Greta Thunberg, a 16-year-old Swedish activist who has made global headlines for her strikes.

“Just because I’m young doesn’t mean I can’t have opinions. And that I think it’s really something worth fighting for,” said Alienor Rice, a student at the International School of Boston.

Students taking the day off from area schools were joined on the sunny plaza by adults also concerned about climate change. Some parents brought their small children. Upbeat pop music blared through loudspeakers.

Demonstrators carried a variety of colorful handmade signs, proclaiming, “Science is not fake news,” “Make Earth great again,” and “We don’t inherit the earth from our ancestors. We borrow it from our children.”

Students drew colorful chalk designs on the brick plaza as others applied paint under their eyes.

“The young people are trying to wake us up. And I thought I should come and be woken up,” said Cynthia Enloe, 81, of Cambridge.

Hundreds of thousands had already rallied around the world by mid-morning on the East Coast, in what is expected to be one of the largest global climate demonstrations in history, the organizers said. More than 800 events were expected Friday in the United States.

“We strike for the Era of the Green New Deal. We are not Generation Z; We are #GenGND,” the strike’s organizers said in a statement linked to the Boston event page.

Boston Public Schools are allowing students to attend the strike if they have a note from their parents, according to the BPS.

The Brookline school superintendent said in a message to parents that officials considered the rally a “teachable moment.” Students would be allowed to gather in specific spaces outside their schools. The superintendent also said students could leave school if parents follow typical procedures for early dismissal by calling the school.

“It’s really important for us to stand up for our future and not let adults manipulate our future,” said Paul Yang, 15, a junior at Brookline High School who helped organize his school’s walkout.

“You’re going, right?” one boy said to another outside the school. At exactly 10:45 a.m., when classes changed, hundreds of students streamed out of the school, down the street, and to the T station that would bring them to the strike downtown.

“Like Greta Thunberg said, why should we be in school learning for a future we may not have?” said Oona Hall, 14, a freshman at Brookline. She and her friend Camille Jordan, 14, stuck together on their way to the rally, surrounded by cheering students. Jordan said “the consequences are really big” for skipping school, but the strike was too important to miss.

The strikers are calling on Massachusetts Governor Charlie Baker to declare a state of emergency for the climate, the statement said.

“It’s simply not right for Harvard to be investing in the very industries that are destroying our planet,” said Caleb Schwartz, a student at Harvard University and spokesman for Fossil Fuel Divest Harvard.

In Canberra and Kabul, Cape Town and Berlin, and across the globe, hundreds of thousands of people had already taken to the streets to demand that leaders tackle climate change, The Associated Press reported.

Events kicked off in Australia, where protesters marched in 110 towns and cities.

Organizers estimated more than 300,000 protesters took to Australian streets in what would be the country’s biggest demonstration since the Iraq War in 2003.

Hundreds of rallies took place across Europe, including in the Czech Republic, Germany, Britain, and Poland, which is still widely coal-reliant and where many middle schools gave students the day off to enable them to participate in the rallies in Warsaw and other cities.

In Berlin, organizers said 80,000 people gathered in front of the capital’s landmark Brandenburg Gate, not far from Chancellor Angela Merkel’s office where the Cabinet was thrashing out the final details of a plan to curb Germany’s greenhouse gas emissions.

In Helsinki, the Finnish capital, a man dressed as Santa Claus stood outside parliament holding a sign: ‘‘My house is on fire, my reindeer can’t swim.’’

In the Afghan capital, Kabul, an armored personnel carrier was deployed to protect about 100 young people as they marched, led by a group of several young women carrying a banner emblazoned with ‘‘Fridays for Future.’’

Rallies were also held in Johannesburg and the South African capital, Pretoria, as well as Kenya’s capital, Nairobi.

Zoe Greenberg of the Globe staff contributed to this report. Material from The Associated Press was used in this report. Alyssa Lukpat can be reached at alyssa.lukpat@globe.com. Follow her on Twitter @AlyssaLukpat.
Loading comments...
Most Popular in metro
Real journalists. Real journalism. Subscribe to The Boston Globe today.