The teenagers had fevers, chest pain, and struggled to breathe. Many coughed up mucus or blood. Some felt nauseous and vomited.

The teens were among the seven patients Boston Children’s Hospital has seen over the past year and a half believed to be suffering from vaping-related lung illness that has recently roiled the country, leaving seven dead and 380 hospitalized.

Suspecting infection, doctors treated the teens with antibiotics, but puzzlingly, symptoms persisted and tests were negative. All the patients needed respiratory support, from oxygen to breathing tubes in the intensive-care unit.

“We thankfully have not lost anybody at Boston Children’s,” said Dr. Alicia Casey, a pediatric pulmonologist. “These are otherwise healthy teens . . . presenting very sick.”

The exploding outbreak, linked to 38 possible cases in Massachusetts, has raised questions about why it’s happening now, when vaping has been popular for years. Officials say the disease has affected people who vaped cannabis, nicotine, or both, and who used both legal and black-market products. 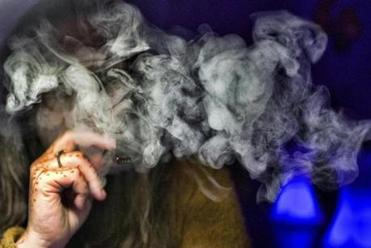 The statewide count rose from 10 after the state Department of Public Health issued an order requiring clinicians to report any possible cases of severe lung disease caused by vaping or use of electronic cigarettes.

Local doctors believe the vaping-related lung injuries have been going on much longer and affected far more people than officially reported. They say there are a host of reasons for the current crisis: toxic chemicals in the supply chain of vape products; clinicians previously only asked patients about cigarettes, not vaping; and more people are vaping now.

“I am confident that that official count is an underestimate,” Casey said. “We weren’t asking the right questions.”

In the past, Casey said, doctors likely attributed the illnesses to other causes such as asthma, pneumonia, or viral infection. Many patients who stopped vaping and received treatment have recovered enough to go home quickly.

The task of identifying toxic chemicals in vaping products has grown more complex amid the diversity of symptoms. Some patients have arrived at Children’s with severe trouble breathing that just began, Casey said, while others noticed chronic coughs worsening over months.

The outbreak probably represents a constellation of illnesses that are being grouped together because they all seem to have vaping in common, said Dr. Edward W. Boyer, a toxicologist with Brigham and Women’s Hospital and an associate professor of emergency medicine at Harvard Medical School.

“It’s associated with a behavior, not a particular chemical or number of chemicals,” Boyer said. “That may be an entirely improper way of examining the problem altogether [but] that’s our best option right now.”

Boyer, who is working with Casey to publish reports about the Children’s cases in a medical journal, said health investigators need better data on symptoms, outcomes, and the vaping products that patients used.

“Anyone who tells you with confidence what is going on is not being accurate,” Boyer said.

Vaporizers typically heat oils or liquids into vapor to be inhaled. Doctors say the lungs are not meant to handle liquid, and the vaporized ingredients may cause problems by cooling in the lungs to a liquid state or transforming into toxic chemicals when heated.

The patients had largely started vaping early, some in middle school, but others began in recent months, Casey said.

An important part of the healing process is to stop vaping, Casey said, but she fears that some of the teens may struggle to do that because of their addiction to nicotine.

Another challenge for clinicians is that patients aren’t always forthcoming about behavior that’s socially frowned upon. Boyer said he saw a patient in recent months who complained of trouble breathing and reported having not vaped for weeks, but there was no way for the doctor to know whether that was true.

“Things generally in the area of vice, people don’t like to admit that that behavior is ongoing,” Boyer said. The patient received an asthma inhaler and was fine to go home.

Even if patients do come clean about vaping, it’s difficult to test the vape cartridges that patients submit because investigators don’t know what to test for. Authorities have said that no one chemical has been found in all cases, although federal officials have identified an additive called vitamin E acetate as one possible culprit.

“To take a sample and say, ‘Tell me everything that’s in here’ — that’s a very difficult chemistry problem to solve,” said Dr. Daniel Overbeek, a fellow at the Regional Center for Poison Control and Prevention.

There is little regulation on the ingredients allowed into both tobacco and cannabis vaping products, experts said, as it’s not established what is safe long term. The state Cannabis Control Commission wants to require more transparency on ingredient labels, but it does not restrict additives. Specialists say nobody really knows what’s safe.

Clinicians are now troubled that kids say they’re vaping because it’s cool, they think it’s safe, and their friends are doing it.

“I never thought in my lifetime that we would be going downhill like this with nicotine, which is why people didn’t realize this was going on,” Casey said. “The medical community had kind of been celebrating our accomplishments with burned cigarettes and then this came out of nowhere.”

If you or a family member has suffered from a suspected vaping-related illness, we’d like to hear from you. Contact Naomi Martin at naomi.martin@globe.com.
Loading comments...
Most Popular in metro
Real journalists. Real journalism. Subscribe to The Boston Globe today.