The iconic Doyle’s in Jamaica Plain, a pub with a storied political history that first opened in 1882, plans to close up shop and has inked an agreement to sell its liquor license to Davio’s Northern Italian Steakhouse, according to city documents and Doyle’s owner Gerry Burke Jr.

Burke confirmed in a phone interview that Doyle’s is shutting its doors. It wasn’t immediately clear when. A Licensing Board hearing on the proposed sale of the liquor license is slated for Sept. 18 at 10 a.m., records show.

“It’s very sad,’’ Burke said. “I grew up here and I’ve had a wonderful childhood. It’s been my identity for as long as I can remember. It’s a terrible thing and I’m as sad as I can be. But the real estate in JP is as high as it’s going to get and I can’t afford to stay here any more.’’

He added, “As of right now, I don’t know when our last day is going to be. They say this takes time so we probably have a month or maybe two.’’

A purchase and sale agreement filed with the city on Aug. 6 shows that Davio’s plans to buy the seven-day, all-alcohol license currently owned by Doyle’s, using it for the new 15,000-square-foot megarestaurant planned in Boston’s Seaport. 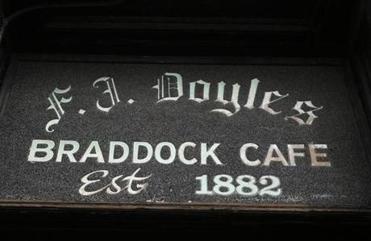 At Doyle’s, where everybody knows the name, the Burke brothers tap into the city’s changing spirit

Jerry, Eddie and Billy Burke are third-generation Irish-Americans who grew up in the neighborhood and understood and responded to how it and the city were changing.

Davio’s would buy the license for $455,000, according to the sale agreement.

Davio’s has not yet released any comment on the sale agreement to the Globe.

Boston City Councilor Matt O’Malley, who lives in Jamaica Plain, tweeted that it was “devastatingly sad news” to hear about Doyle’s closing, calling it a “titanic loss” for the neighborhood.

“Doyle’s played a huge role in shaping our neighborhood (& politics),” he tweeted. “It was my unofficial district office & the home of more civic associations, groups, & JP orgs than I can list.”

Devastatingly sad news about @DoylesCafe, a JP institution since 1882. Doyle's played a huge role in shaping our neighborhood (& politics). It was my unofficial district office & the home of more civic associations, groups, & JP orgs than I can list. Titanic loss for the n'hood. https://t.co/NdO6hqFnBW

On Tuesday, Elizabeth Laramie and her family stopped on the way out of the bar to take a cell phone picture of Doyle’s facade. They hadn’t known when they stopped by on a visit from Nashua that this could be their last time drinking here.

“It’s Boston, that’s what it is to me. It’s old and it looks like it,” said Laramie, 25. “This is where I’d bring someone if they were visiting Boston.”

Frank Duggan said he was far from surprised to hear about the closing as he walked by Doyle’s Tuesday afternoon. The 63-year-old Hyde Park resident grew up just a few blocks away, and he took a guess about what would rise in the pub’s place.

“Condos. What else is around here?” Duggan said. “There’s not going to be anyplace to go.”

Maryjane Murphy, who lived in Jamaica Plain for 36 years and still visits regularly from Plymouth, heard the bad news from Doyle’s staff as she left Tuesday.

“I feel sad. This is a neighborhood bar,” she said.

Word spread quickly among patrons both inside and outside the bar Tuesday afternoon, and many rushed over after hearing that Doyle’s had become the latest casualty of Jamaica Plain’s transformation.

“With all the construction and all the crazy things going on here, I’m not surprised,” said Juan Carlos, who lives nearby. He brought his 3-year-old daughter, Cataleya, for dinner, and he said the staff took the time to remember her name after she visited before. “There are a lot of new places opening, but there’s nothing like this. This is history here.”

A 1986 Globe story described Doyle’s, which currently sits at 3484 Washington St., as a place where Jamaica Plain residents “have eaten, drunk and swapped neighborhood gossip since 1882.”

The story continued, “Built to serve factory workers in the area, it was moved from a building next door in 1904. Edward Burke, whose father ran the concessions stands at Franklin Park for years and brought up his family a mile and a half from Doyle’s, bought the place in 1970, and runs it with a relaxed goodnaturedness and appreciation for the more than 100 years of history preserved under its spinning ceiling fans.”

An earlier story published in 1979 noted that live music had shaken things up at the popular establishment.

“Well, the residual hippies, who have been taking it on the chin ever since the Grateful Dead went commercial and the disco generation took over like a blitzkrieg, have indeed won out at Doyle’s,” the ‘79 story trumpeted. “This Jamaica Plain watering hole -- right under the subway tracks of the Orange Line at 3484 Washington st. -- has become, in less than two years since live music was introduced and the ‘old men and sawdust’ climate cleaned up, one of the most wide-open, individualistic clubs around.”

By 1994, Doyle’s reputation as a welcoming place for all comers was firmly established.

“Doyle’s Cafe was once a joint not unfamiliar to combinations of jabs and hooks,” said a Globe story from that year. “It is now neutral territory, a meeting place for whites, blacks, Latinos and Asians; for pols of every stripe; for straights and gays; for local elbow-benders at the bar and policy wonks in the no-smoking room; for law-enforcement types and those they have put away for a spell; for doers and dreamers.”

That gushing story noted that on one recent night that year, then-US Senator John F. Kerry had come through with a few aides and activists, while “local pols came by to pay respect.” And Kerry, who later ran for president and served as US Secretary of State, wasn’t the only bigshot at the bar that night.

“Earlier, Eddie Jesser, a confidant of Mayor Menino, was chewing the fat with his close friend, former state Sen. Joe Timilty,” the ‘94 Globe story said. “In another corner, state Sen. Paul White, a Dorchester Democrat, had just come in with a bevy of political pals after having knocked on doors and rung bells for his reelection effort.”

Doyle’s also has ties to the movie business.

“Emmy Rossum’s body is discovered in the old bear den in Franklin Park after her character spends the evening drinking at Doyle’s Cafe in JP, and the corner store that Penn’s Jimmy Markum runs is Miller’s Market on K Street in South Boston,” Burr wrote.