Federal prosecutors Friday urged a judge to sentence actress Felicity Huffman to a month in jail for her role in the college admissions bribery scandal, arguing that her conduct was “deliberate and manifestly criminal.”

“In the context of this case, neither probation nor home confinement (in a large home in the Hollywood Hills with an infinity pool) would constitute meaningful punishment or deter others from committing similar crimes,” prosecutors said in a sharply worded memorandum filed in US District Court in Boston.

Huffman, 56, who is scheduled to be sentenced next Friday , pleaded guilty in May to fraud charges for paying $15,000 to a college counselor who arranged to have someone proctor her daughter’s SAT exam in 2017 and correct her answers afterward.

“Her efforts weren’t driven by need or desperation, but by a sense of entitlement, or at least moral cluelessness, facilitated by wealth and insularity,” prosecutors wrote. “Millions of parents send their kids to college every year. All of them care as much as she does about their children’s fortunes. But they don’t buy fake SAT scores and joke about it . . . along the way.”

In an emotional letter to US District Judge Indira Talwani, who is presiding over her case, Huffman described how she became entangled in the cheating scandal and expressed “deep and abiding shame over what I have done.” 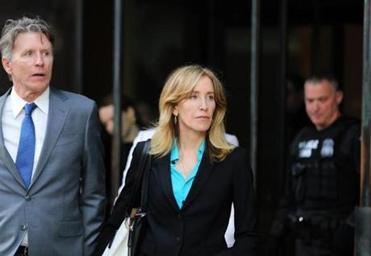 Federal prosecutors are recommending a one-month jail sentence for Huffman in connection with the Varsity Blues case.

Her letter was filed in court Friday, along with a memorandum by her lawyers arguing that a just sentence would be one year of probation, 250 hours of community service, and a $20,000 fine.

They also filed 27 additional letters of support for Huffman, including ones written by her husband, actor William H. Macy, and her former “Desperate Housewives” costar, Eva Longoria.

Huffman was among 50 people, including celebrities, coaches, and high-powered financiers, charged with participating in the scheme, in which wealthy parents allegedly paid bribes ranging from $15,000 to $1.2 million to help their children get into some of the nation’s top colleges.

The money was funneled through a bogus charity created by William “Rick” Singer, a college counselor and the scheme’s admitted ringleader. In some instances, parents allegedly paid him to have someone else take their children’s SAT or ACT exams or correct their answers afterward. In others, parents allegedly paid him to bribe coaches to designate their children as athletic recruits for sports they didn’t play, helping their chances at admission.

“The factual story is that I didn’t go shopping for a college counselor to find out how to rig a SAT score,” Huffman wrote in her three-page letter. She said her daughter, Sophia, had been diagnosed with learning disabilities as a child and she hired Singer for guidance and expertise on how to apply to college because he had been recommended as “one of the best experts in LA.”

Huffman said her daughter was passionate about majoring in theater, but over time Singer told her that if her math SAT scores didn’t improve dramatically, none of the colleges she was interested in would even let her audition. She said she was shocked when Singer told her he could have a proctor bump up her daughter’s test scores. She said she weighed his offer for six weeks before agreeing to it.

“As warped as this sounds now, I honestly began to feel that maybe I would be a bad mother if I didn’t do what Mr. Singer was suggesting,” Huffman wrote. She said she was haunted by her decision afterward and opted not to pay Singer to boost her other daughter’s scores.

“In my desperation to be a good mother, I talked myself into believing that all I was doing was giving my daughter a fair shot,” Huffman wrote. Later, she said she realized she had betrayed her daughter, who was unaware of what she had done.

“When my daughter looked at me and asked with tears streaming down her face, ‘Why didn’t you believe in me? Why didn’t you think I could do it on my own?’ I had no adequate answer for her. I could only say, ‘I am sorry. I was frightened and I was stupid.’ ”

In his letter to the judge, Macy wrote that Huffman is “still an amazing mother.”

“I don’t know where she finds the strength, because as much as she tries to put on a good face, I can see the pain,” he wrote. “She hurt her daughters. It was the one thing she swore never to do, and she did it.”

Macy said it was not clear whether Huffman would resume her acting career, noting that she had received no job offers since her arrest.

He ended the letter by writing “every good thing in my life is because of Felicity Huffman.”

Longoria, who starred with Huffman in the television series, also wrote to Talwani, referencing Huffman’s “gentle character and kind heart” and saying that Huffman fought for her to be paid more on the show.

“Her humor always made things better, but it was her heart and intentions to make sure I was always OK that I remember most,” she said in the letter.

Under a plea agreement, prosecutors had initially indicated they would recommend that Huffman serve at least four months in jail for conspiracy to commit mail fraud and honest services mail fraud. But in Friday’s memorandum, prosecutors shaved several months off that request, noting that one month in jail would be sufficient “while recognizing Huffman’s nearly immediate acceptance of responsibility, individual circumstances, and culpability relative to her co-conspirators.”

Prosecutors are also asking for Huffman to be placed on probation for one year and fined $20,000.