The judge at the center of a courthouse controversy over the handling of charges against protesters at the Straight Pride march Saturday is a former military lawyer with a famous family name and a reputation for meting out tough justice from the bench.

Boston Municipal Court Judge Richard J. Sinnott, a white-haired 63-year-old who was appointed by Governor Charlie Baker two years ago, has had a career that took him from Suffolk Law School to a job in the district attorney’s office to service in the Middle East.

Along the way, he had a brush with the law himself after a shooting on City Hall Plaza.

He is the son and namesake of Boston’s last “city censor,” who reviewed — and sometimes banned — concerts, movies, and shows in the city.

Former colleagues and those who have appeared before Sinnott describe him as a bright, thorough jurist. One defense attorney, Steven Boozang, described him as “tough but fair.” 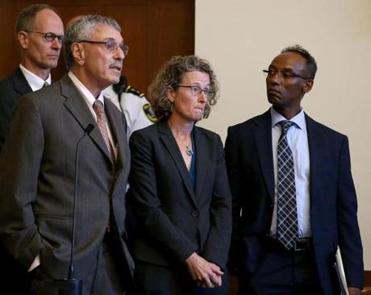 Shirley Leung: Lawyer held in contempt is guilty — of acting like a man

When a male judge placed attorney Susan Church in custody, it was as if to remind women everywhere how they must be delicate, docile and deferential — or else.

“He knows what he’s talking about when he has a case,” said Boozang.

But District Attorney Rachael Rollins and some in the defense bar differ strongly.

Earlier this week Sinnott refused requests from prosecutors in Rollins’s office to drop charges against several protesters who clashed with police at the Straight Pride march. Sinnott also had Susan Church, a defense lawyer who had questioned his stance, taken into custody for three hours after citing her for contempt.

Now, Sinnott is facing sharp criticism from Rollins, who called his actions “unprecedented and outrageous.” The Massachusetts Association of Criminal Defense Lawyers denounced Sinnott’s decision as a “gross abuse of power that requires judicial disciplinary action” and called for an immediate investigation by Trial Court officials and the state’s Commission on Judicial Conduct.

“Unless addressed immediately and publicly, his misconduct will have a chilling effect on defense lawyers who have the constitutional duty to zealously and vigorously advocate for their clients,” the group said in a statement.

“Throwing an attorney in jail simply to silence her appropriate advocacy on behalf of her client is an abuse of power that cannot be taken lightly,” he said.

Through a Trial Court spokeswoman, Sinnott declined to comment. Massachusetts judges are not permitted to comment on pending cases.

The events were presaged by another case, in April, of a man accused of shoplifting at The Gap in Copley Place. Suffolk prosecutors wanted to set him free, and his lawyer said he was receiving drug treatment. But the man had 11 open cases against him, and Sinnott ordered him held for 90 days.

“While commendable that the defendant has sought treatment, plainly his attendance at the program has not stopped the defendant from committing thefts to ostensibly fuel his drug habit,” Sinnott wrote in his decision. “The court finds the defendant is incapable of confining his behavior to the law no matter what conditions of release this court could impose.”

This week, as prosecutors sought to have cases against the Straight Pride protesters dropped or dismissed, Sinnott repeatedly brought up the state’s Victim’s Rights Law. While prosecutors have the authority to dismiss a case before arraignment, victims — including police officers — have the right to be notified before that happens, Sinnott said.

In some cases, Assistant District Attorney Jessica Erickson said there were no named victims in police reports for charges like disorderly conduct and resisting arrest. But Sinnott strongly suggested that the people marching in the parade and the officers who arrested the counterprotesters should be considered victims.

“I don’t see why a police officer should be any different than the person on the street in terms of being notified,” said Boozang, the defense attorney. He said judges want to know how victims feel before dismissing charges and that it was “a fair question” to ask whether the officer who accused the protester of resisting arrest had been consulted.

Needham attorney Timothy M. Burke, who worked with Sinnott in the 1980s when Sinnott was an investigator for the Suffolk County district attorney’s office and Burke was a homicide prosecutor, said it was “not an unreasonable request” for Sinnott to ask prosecutors whether they consulted the officer who brought the resisting arrest charge before moving to dismiss it.

Burke said the decision by prosecutors to drop charges doesn’t prevent the judge from making sure the law is being followed.

“Whether the ultimate decision is right or wrong, it doesn’t prevent the judge from making a responsible inquiry as to whether or not the prosecutors have fulfilled their responsibility to confer with potential victims who may have been injured in the course of the arrest,” he said.

Of 36 arrests from the weekend march, the Suffolk district attorney’s office has decided to prosecute eight people, seven of them on charges of violence. The eighth person was a Stoneham man charged with disorderly conduct and resisting arrest who had a prior arrest record, officials said. The eight men have pleaded not guilty.

They can file what is called a nolle prosequi, unilaterally declaring that they will not pursue the case and ending it immediately. Or they can ask a judge to dismiss charges, sometimes in exchange for the defendant agreeing to do community service or seek treatment.

In a nolle prosequi, prosecutors hold the power to do away with the case. In a dismissal, the judge does. This week’s cases have been a mix of strategies.

Boston police officers in the courtroom hailed Sinnott for resisting prosecutors’ efforts to have the charges dismissed.

From 1980 to 1991, Sinnott worked as a criminal investigator for the Suffolk district attorney’s office, and graduated from Suffolk Law School in 1990, according to his judicial nominee questionnaire.

He later deployed to the Middle East at the start of the Iraq war in 2003, following his commission in 1998 as a first lieutenant in the US Army Reserve. From 2010 to 2013, Sinnott led a group of 50 Army Reserve judge advocates in teaching human rights and justice to international soldiers, judges, attorneys, and others, he wrote.

He formed “the only U.S. military team devoted to Woman Peace and Security” and “created and led the first seminar in the Democratic Republic of the Congo on human trafficking and sexual violence,” he wrote.

Years earlier, in 1980, Sinnott shot a man on City Hall Plaza in what Suffolk prosecutors deemed an act of self-defense. According to a Globe story from the time, Sinnott wounded Coast Guardsman Michael Hulme during a wild encounter shortly before midnight on Sept. 17 of that year. Hulme, 22, survived.

During an arraignment for two other men involved in the incident, a prosecutor read a brief statement maintaining that Sinnott was the victim of an unprovoked attack by five men, according to the article.

The Globe reported that other investigative sources contended “that Sinnott may have precipitated the incident by spraying the group with mace after they ignored his orders to stop kicking the tires of an F15 fighter jet on display in the plaza.”