Severely ill immigrants, including children with cancer, cystic fibrosis, and other grave conditions, are facing deportation under a change in Trump administration policy that immigration advocates are calling cruel and inhumane.

The policy change will affect at least a dozen children receiving treatment at Boston hospitals and potentially thousands of additional immigrants across the country, according to lawyers and advocates. All had been granted “medical deferred action,” a special status that allows immigrants to remain in the country legally, receive Medicaid, and work while they receive treatment for dire health conditions.

Beginning last week, lawyers for some of these immigrants received boilerplate letters from Citizenship and Immigration Services informing them the agency’s field offices will no longer consider applications for renewal under the program. Exceptions will be made only for military families.

The letters told families that if they did not leave the United States in 33 days, they would become undocumented and face deportation proceedings.

Advocates, lawyers, doctors, and lawmakers said the blanket policy change was made without any consideration of the potentially disastrous health affects it will have on children and adults battling HIV, muscular dystrophy, epilepsy, leukemia, and other diseases. 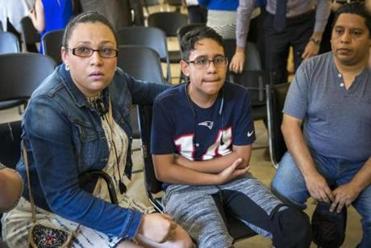 Trump’s latest move is another cruel blow to immigrants

Step by malicious step, the Trump administration is turning the American immigration system into an apparatus of appaling, intentional cruelty.

“Just when you think the administration can’t sink any lower, it finds a new way to torture our immigrant children and families,” said Ronnie Millar, executive director of the Irish International Immigrant Center, which has obtained “medical deferred action” for families for 10 years and currently represents 19 families who expect to have their applications for that status rejected.

The program granted stays of deportation in two-year increments and didn’t promise immigrants a future in the United States, just access to care in a time of need, said Dr. Sarah L. Kimball, who works in the Immigrant and Refugee Health Program at Boston Medical Center.

Boston, with its constellation of world-renowned hospitals, has been a haven for many such families, she and others said. Some traveled here specifically for life-saving treatments, and others fell ill while visiting the United States on visas.

An official from the Dana Farber Cancer Institute also spoke out against the new policy at a news conference Monday at the Irish International Immigrant Center in Boston.

“Patients who are protected by medical deferred action are doing it out of desperation,” Kimball said. “It’s a tenuous legal status. It’s one that’s hard to get and, in my experience, not easily given.”

Shonell Norville, a 37-year-old from Guyana, said she and her 7-year-old son, Joaquim, are facing deportation when their medical deferred action expires in March.

They came on a tourist visa in August 2016 to visit Joaquim’s grandparents, who are US citizens, and were visiting Franklin Park Zoo when Joaquim fell ill and was diagnosed with epilepsy, Shonell Norville said. Since then, Joaquim has had major problems. His lungs collapsed when he had a seizure, requiring doctors to perform a tracheotomy. He also developed an infection in his colon, requiring the removal of his large intestine and the use of a colostomy bag.

Joaquim currently receives regular care at Boston Medical Center and Boston Children’s Hospital to control his seizures, and Shonell Norville said she fears for his life if he is sent back to Guyana, one of South America’s poorest countries.

“I tell people, I feel like I’m signing my son’s death warrant,” she said, adding that she fought to stay in Boston “to save him — now, just to be pushed out. How do you comprehend that?”

Mariela Sanchez, a Honduran who lives in Dorchester, said she fears for her son, Jonathan, who is 16 and was born with cystic fibrosis. They came to Boston in 2016 so he could be treated at Boston Children’s Hospital after Jonathan’s older sister died of cystic fibrosis in Honduras, she said. Since then, Jonathan has received regular physical therapy and intravenous antibiotics at Children’s.

“He would die without a doctor, without help, without medicine,” Mariela Sanchez said. “Our country is not in any condition to help him.’’

The action is the latest in a series of moves by the Trump administration targeting immigrants, including tougher detention policies at the border and the removal of legal protections for hundreds of thousands of undocumented immigrants brought to the country as young children.

Last week, Citizenship and Immigration Services said it would no longer schedule new asylum interviews in Boston, as part of an effort to shift resources to the southern border. Critics said the move would increase the already daunting wait times for asylum-seekers.

In a statement Monday, Citizenship and Immigration Services confirmed its latest move against seriously ill immigrants. The agency said its field offices “will no longer consider non-military requests for deferred action, to instead focus agency resources on faithfully administering our nation’s lawful immigration system.”

The statement insisted the “changes to our internal guidance do not mean the end of deferred action.” Instead, Citizenship and Immigration Services said it will refer decisions about such cases to Immigration and Customs Enforcement, or ICE.

Immigration lawyers dismissed the notion that ICE would now be considering such cases, noting the rejection letters their clients have received made no mention of that possibility and merely told them to leave the country in 33 days.

“There’s no procedure for that,” said Anthony Marino, director of Immigration Legal Services at the Irish Immigrant Center. “I think what’s happening is they’re playing games. I think the deferred action program has ended.”

Mahsa Khanbabai, chair of the New England chapter of the American Immigration Lawyers Association, said her organization confirmed with Citizenship and Immigration Services that renewals under the program ended Aug. 7.

She said the change means officials can no longer make humanitarian decisions and focus their limited resources on deporting dangerous people, not the most vulnerable.

Democratic US Senator Edward J. Markey vowed to try to save the program, but said he saw little hope in the Republican-controlled Senate.“We have now reached the bottom — the most inhumane of all of Donald Trump’s policies,” Markey said.

Michael Levenson
can be reached at mlevenson@globe.com.
Loading comments...
Most Popular in metro
Real journalists. Real journalism. Subscribe to The Boston Globe today.