That was the all-caps headline in The Boston Globe on April 2, 1995, that announced Gina Grant’s acceptance at Harvard. In addition to being a straight-A student, captain of the tennis team and a mentor to underprivileged sixth- and seventh-graders, the 19-year-old was also an orphan who lived on her own in Cambridge, Massachusetts.

‘‘Like Gina Grant, there have always been kids who, in the absolute worst of circumstances, do better than just hang on,’’ affirmed the glowing profile.

But it soon became clear that the circumstances of Grant’s upbringing were far worse than she had led admissions officers at the Ivy League university to believe. She had served six months in a juvenile detention facility after pleading no contest to killing her mother in 1990, striking her over the head at least 13 times with a lead crystal candlestick at their handsome brick home in Lexington, South Carolina.

Prosecutors called it a calculated murder. The juvenile called it a desperate effort to protect herself from an alcoholic parent. Harvard, after receiving news clippings about the case, called it an unforgivable omission that the student had not disclosed the crime and the punishment in her application. Within a week, the university had revoked its offer. 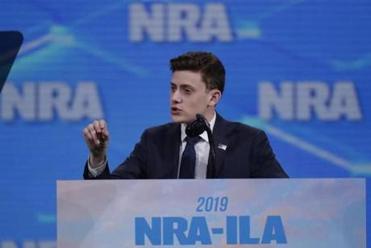 Kyle Kashuv announced Monday that Harvard had decided to rescind his admission to the university’s Class of 2023 because of racist comments that he made nearly two years ago.

Grant’s experience was highly unusual. Yet she is not unique in gaining entrance to Harvard — thereby beating the odds — only to be turned away before matriculating.

The same fate has now befallen Kyle Kashuv, 18, a survivor of last year’s shooting at Marjory Stoneman Douglas High School in Parkland, Florida, who became a prominent and provocative spokesman for gun rights, earning him an audience with President Donald Trump. That set him apart from many of his classmates, who lobbied for tighter controls on guns.

He wrote about his experience in his college applications, which landed him a spot at Harvard in March. It would be a fleeting offer.

The teenager announced on Monday that his acceptance had been rescinded because of racist and vituperative comments he had made online when he was 16, months before the shooting that would leave 14 of his classmates dead.

In a Google Docs study guide that doubled as a freewheeling chat room, Kashuv repeatedly wrote the n-word, adding that he was expert at typing the slur because ‘‘practice,’’ he said, ‘‘makes perfect.’’ He also made crude comments about women in private messages that were disclosed to the national media.

When the remarks surfaced last month, as he was preparing to graduate, he said the ‘‘callous and inflammatory language,’’ used when he was a high school junior, was ‘‘not indicative of who I am or who I’ve become in the years since.’’ Kashuv is the former high school outreach director for Turning Point USA, a conservative group roiled by accusations of racial bias.

The decision by Harvard, which declined to comment on the case, poured fuel on an explosive debate over college admissions, personal accountability, race and the Second Amendment.

Critics of the university’s position saw in its treatment of the teenager a ‘‘major victory for the online mobs of cancel culture’’ — evidence that elite institutions would not brook differing political opinions. ‘‘Welcome to the future,’’ wrote Seth Mandel, the executive editor of the Washington Examiner. ‘‘It’s a social sewage treatment plant.’’

Others observed that Harvard, as a private institution, enjoys the right to set its own standards of individual responsibility. They noted that the selective university is entirely out of reach for scores of students who face structural disadvantages, made stark recently by the admissions cheating scandal. They predicted that Kashuv would land on his feet, emphasizing that he had already emerged from frightful circumstances — if not the ‘‘absolute worst’’ invoked by The Boston Globe’s profile of another Harvard admit — to become a darling of right-wing media.

Kashuv argued that Harvard was denying the possibility that people could change, noting that the university’s ‘‘faculty has included slave owners, segregationists, bigots and antisemites.’’ His indignation was countered with the argument that deploying racial slurs should have consequences — especially during the years of a young person’s life that form the basis of a college application.

Over the years, Harvard has dropped a number of admitted students for a range of legal and ethical lapses, from accusations of sexual assault to revelations of plagiarism to participation in the online exchange of sexist and bigoted memes.

‘‘An offer of admission may be rescinded if a student engages in behavior that brings into question his or her honesty, maturity, or moral character,’’ a university spokeswoman told the Harvard Crimson, the undergraduate newspaper, in 2015. A sharp, and unexplained, descent in academic performance may also do the trick.

The range of rescinded offers illuminates the difficulty of deciding what sort of conduct - at what age - should endanger educational opportunities and prohibit participation in a community designed not just to transfer skills but also to cultivate a certain set of values. The trail of commentary that young people leave online makes the question of what can be forgiven especially acute.

The basis for reversing offers of admission has not always been activity directly pertaining to the college.

Owen Labrie, who was found guilty in 2015 on several misdemeanor counts for having sex with a 15-year-old girl when he was a senior at St. Paul’s School in Concord, New Hampshire, was no longer listed as an admitted student at Harvard by the fall of 2014. The university would not say whether it had revoked his acceptance or whether he had withdrawn.

In 2003, Harvard rescinded an offer to Blair Hornstine after reports surfaced that she had plagiarized material in articles for her local paper. The prospective student — who faced long odds because of a disability that required her to take many of her courses from home — made national headlines for suing to block officials at her school from naming multiple valedictorians. She won that case, convincing a federal judge to order her school district in Moorestown, New Jersey, to make her the sole valedictorian of the class of 2003. But she lost her spot at Harvard.

Even the episode involving matricide — at the extremity of possible wrongdoing — was not clear-cut. The mystery of what unfolded between the 14-year-old and her mother was never fully resolved. In completing her Harvard application five years later, Grant had answered ‘‘No’’ to the question of whether she had faced ‘‘serious or repeated disciplinary action.’’ But the question covered only ‘‘the last three years,’’ and four had elapsed since she walked free.

‘‘I deal with this tragedy every day on a personal level,’’ Grant said in a statement at the time. ‘‘It serves no good purpose for anyone else to dredge up the pain of my childhood. I’m especially distressed that my college career may now be in jeopardy.’’

Columbia and Barnard followed Harvard in revoking their offers. Only Tufts stood by its decision to admit her, and she enrolled at the campus in Medford, Massachusetts, in the fall of 1995.

Views differed about whether she belonged there. A conservative student magazine distributed leaflets assailing administrators for admitting her. She lived in a dormitory, in a single bedroom.