Mayor Martin J. Walsh on Monday called for a delay in the MBTA’s planned fare increase as well as local representation on the agency’s oversight board following last week’s Red Line derailment, which was the second train derailment for the T in June.

Walsh made the calls on Twitter as T officials gathered for a board meeting and discussed the status of the repairs.

There should be no fare increase until the Red Line is fixed.

The @MBTA must act with urgency and it's unfair to ask riders to pay more until the Red Line is fully operational.

Walsh said no fare increase should take place before Red Line fares are completed, but officials at the meeting threw cold water on the idea. State Transportation Secretary Stephanie Pollack said it was “not the correct gesture.”

T board chairman Joe Aiello said, “The broader fare increase, I think, is too much of a blunt instrument to roll back at this point.”

Later Monday, Walsh argued that Boston residents don’t have a say in the T’s management despite being “most impacted by the failures” of the system.

Boston is most impacted by the failures of the @MBTA.

It's our residents, our workers & our commuters who feel the pain. Yet we do not have a seat at the table when decisions about the T are made.

I'm calling on the @MBTA to reinstate a local seat on the oversight board. 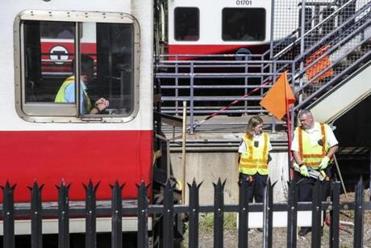 Officials at the transit agency have thrown cold water on the Boston mayor’s request to push back July 1 fare hikes.

The Red Line is continuing to operate at a reduced level as crews work to repair extensive damage caused when a train derailed last week. The train struck multiple structures housing signal equipment outside of JFK/UMass station. Officials have not yet determined a cause.

Though service has resumed, MBTA officials said Monday Red Line passengers should still plan for an extra 20 minutes of travel time and expect trains to run slower than usual.

Steve Poftak, general manager of the MBTA, had dismissed the idea of delaying the fare hike at a press conference on Friday, calling it a process that has “been long underway.”

But frustrated riders have criticized the increases, and more than 5,000 people have signed a petition to stop the fare hike from taking effect until after the T can make fixes to the entire system.

“The people of Massachusetts deserve a better transportation network that doesn’t put their lives at risk,” a message accompanying the petition said.

Somerville Mayor Joseph Curtatone also has also spoken out against the fare increase, calling it “unconscionable” in the face of failing service.

Matt Stout and Martin Finucane of the Globe staff contributed. Christina Prignano can be reached at christina.prignano@globe.com. Follow her on Twitter @cprignano.
Loading comments...
Most Popular in metro
Real journalists. Real journalism. Subscribe to The Boston Globe today.