The two Massachusetts prosecutors who joined a lawsuit this week to block immigration arrests in state courthouses “probably don’t mind crime,” President Trump charged Wednesday in a radio interview. He also suggested, without evidence, that their efforts are designed to protect ruthless street gangs.

“I think it’s a sad situation and very unfortunate for Massachusetts,” Trump said during an appearance on Boston Herald Radio. “You know, these are people who probably don’t mind crime, they don’t mind what’s going on.”

Trump then pivoted to a discussion about MS-13, the murderous international street gang he called “evil.”

“To try to protect them, I don’t think so,” he said, referring to the lawsuit that Rollins and Ryan joined. Trump also defended the work of ICE officials, calling them “real heroes.” 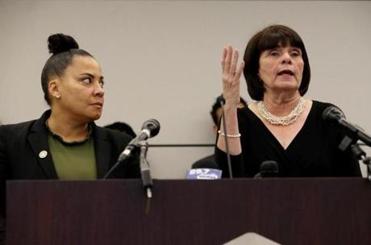 Rollins and Ryan filed the lawsuit less than a week after a state court judge and a court officer were indicted for allegedly helping an undocumented immigrant facing drug and fugitive charges evade an ICE officer in Newton District Court.

Ryan and Rollins separately declined to comment on Trump’s remarks through spokeswomen. But, at a Monday news conference on the lawsuit, Ryan said the “fairness, impartiality, and civility” that have been hallmarks of the American court system have been threatened by ICE’s increased presence in courtrooms.

Trump’s 19-minute appearance was often punctuated with praise from host Herald columnist Adriana Cohen, who bounced between questions about Attorney General William Barr, the opioid scourge, and the 2020 presidential race.

It gave Trump the opportunity to refire criticisms at familiar targets. He said Senator Elizabeth Warren had “defrauded” the public over her claims of Native American heritage and that she shouldn’t criticize Barr, whom she called on to resign after he testified Wednesday before the Senate Judiciary Committee

“She’s not doing very well” in her campaign, Trump said.

He also targeted former vice president Joe Biden (“He’s a sleepy man”) and what he called “dues-sucking” union leaders, claiming that rank-and-file police officers, firefighters, and military personnel will vote for him in 2020.

The comments echoed ones he made on Twitter earlier in the week after Biden announced that the International Association of Fire Fighters had endorsed him in his presidential bid.

“I know the unions, they’re dues-sucking people,” Trump said. “They just want their dues, and they couldn’t care less. But that happens with many unions. The top guys, they’ve been with the Democrats for 50, 60 years. And they don’t care what the members think.”