By Emily Sweeney and Martin Finucane Globe Staff  May 01, 2019

Around 10 a.m., a man in a black stocking hat and camouflage jacket burst into the Middlesex Federal Savings Bank on College Avenue, pointed a gun at the tellers, and demanded “Give me all the money!” before firing a shot into the ceiling, according to a law enforcement official briefed on the investigation.

An alarm was activated, and the robber fired several times at a responding police officer, who returned fire.

“It’s amazing no one was hit,” the official said.

Police described the suspect as a Hispanic man who is approximately 5 feet 9 inches tall and 25 to 35 years old. Security footage showed him holding a pistol in the bank and escaping with a backpack in his hand. 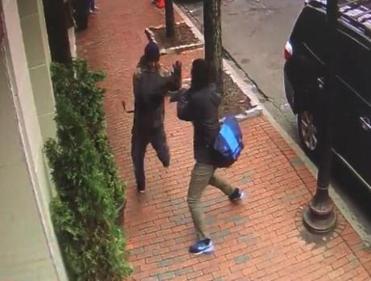 Man who bumped into suspect talks about incident

Web developer Dave Powers, hailed as a hero for trying to help police, could hardly believe he did it himself.

As the man ran down College Avenue, a bystander bumped into him, police said, knocking the backpack to the ground. In an interview, David Powers said he saw the man running away and tried to help.

“I could tell he was being pursued by a police officer, so I was in position to react, and had enough time to do so,” he said. “So I did, just hoping to slow him down.”

The robber kept running and remained at large as of late Wednesday afternoon.

The backpack contained a gun and money, including rolled quarters and loose bills, the official said.

Police searched the area door to door and urged residents in the area to use caution and stay inside, if possible. The MBTA’s Davis Square Station was also closed.

“This person is dangerous,” Somerville Mayor Joseph A. Curtatone said at a news conference. “He fired at a Somerville police officer. He has no regard for human life.”

Somerville police Captain James Donovan said police recovered a gun but were not sure whether it was the weapon used in the robbery. Police had taken a person into custody but determined he was not connected to the robbery.

“We’re confident that was not the person,” Donovan said.

The incident left people in the area rattled. Jesse Cabbage, who works at a barbershop two doors from the bank, said the gunshots shook the windows.

Craig Valley, 37, of Spencer was working in the basement of a nearby housing development when police suddenly arrived.

Valley said he never heard any shots fired or saw the suspect. But police were intently focused on the search.

“They were running . . . guns drawn, going full-bore in search mode,” he said.