The idea of Joe Biden represents a soothing, more comfortable time in politics — of seriousness, of bipartisan comity, of being able to disagree without being disagreeable. While he has made much of his working-class roots, he has also projected the confidence of a man comfortable in the halls of power.

But the reality of Joe Biden has been more complicated. His first run for president, in 1988, was rocky even before he was chased from the race for lifting parts of his speeches from a middling British politician named Neil Kinnock.

He wasn’t much stronger in 2008, when he was overshadowed by Hillary Clinton before being routed by Barack Obama. But everyone likes Joe Biden — including, as it turned out, Obama, who made him his running mate and eventual vice president.

Now Biden is back, and a new Suffolk University/Boston Globe poll has him leading the Democratic field in New Hampshire. The poll showed Biden supported by 20 percent of the voters, followed by Senator Bernie Senders, South Bend Mayor Pete Buttigieg, and Senator Elizabeth Warren. 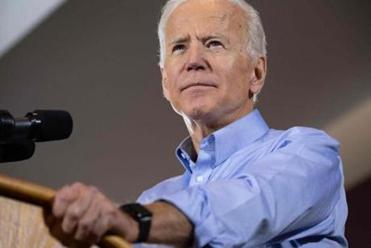 Biden’s selling point couldn’t be simpler or more direct: President Trump is a menace, and I can beat him. That was the theme of his announcement campaign video, which invoked Trump’s despicable comments after Charlottesville as a catalyst for Biden to run.

The video beckoned us to an earlier time, when traditions weren’t being shattered all over the place, when presidents didn’t attack opponents and war heroes, when Washington and our nation were something more recognizable. Biden, the video assured us, will restore that.

Which brings us to the problem with Joe Biden: He wants to make America great again. He wants us to link arms and march backward.

Biden is definitely qualified for the job of president — something I wouldn’t say about the mayor of the fourth-biggest city in Indiana. He can beat Trump, and he would certainly be an improvement. But there’s still something unsettling about a campaign built on the premise of looking backward.

Of course, it’s too early to talk about who’s leading. Day by day, Warren is laying out a blueprint for what a progressive presidency could look like. Of all the candidates, she has the clearest idea of what she would do with the job. But voters don’t seem to be buying in yet.

There is clearly a thirst among voters for something new, which was supposedly going to be embodied by Beto O’Rourke, until his spotlight was completely seized by Mayor Pete. Kamala Harris is running a smart and dynamic campaign, appealing to the Democratic Party’s newly acknowledged diverse and heavily female base. Bernie Sanders is clinging fiercely to the progressive base he built in 2016.

And then there’s Uncle Joe.

His detractors, and they are many, believe his campaign could crater in a hurry. His long record holds nearly as many liabilities as assets. He was one of the architects of what became mass incarceration. He once thought school busing was idiotic. He can’t quite find the words to satisfy critics of his conduct in the Anita Hill hearings. His natural inclination toward accommodating his opponents seems not merely naive, but downright nuts.

I don’t think Biden will crater. I think a lot of voters, especially older voters, have been deeply jolted by the Trump years, and don’t love the idea that our politics must be a perpetual war. For them, Biden offers reassurance. Outside the echo chamber of Twitter and, yes, the media, Biden may have more strength than some give him credit for.

But part of me hopes I’m wrong. Joe Biden has been around a long time, and he’s always been better as an idea than as an actual leader. Like his nemesis in the White House, Biden offers something soothing but illusory, a return to a comfortable past that never really existed.