By Danny McDonald and Andrew Stanton Globe Staff and Globe Correspondent  May 01, 2019

EVERETT — As the casino rose over this city just north of Boston, a question still loomed: Would Wynn Resorts get to keep its gaming license?

Everett got its answer Tuesday when the Massachusetts Gaming Commission allowed the company to retain its license for the $2.6 billion resort casino along the Mystic River.

The decision came after more than a year of uncertainty for the casino, even as crews continued to build the 27-story structure that can be seen from Interstate 93.

Around Everett, local politicians and residents said they were pleased that the gaming commission deemed the Las Vegas-based company suitable to keep its casino license. The Encore Boston Harbor is expected to bring in more than 5,000 jobs, along with hundreds of millions of dollars in payments to Everett and neighboring municipalities, to state government through gambling taxes, and to private vendors who provide supplies and services to the casino.

“I know 5,000 people who can’t wait to get to work, and with this resolution, they now can,” Mayor Carlo DeMaria said in a statement. “Here in Everett, we are counting down the days to June 23rd — the opening of the Encore resort and with it, the culmination of the largest single-phase private development in the history of the Commonwealth. This is truly a great day for the people of Everett.” 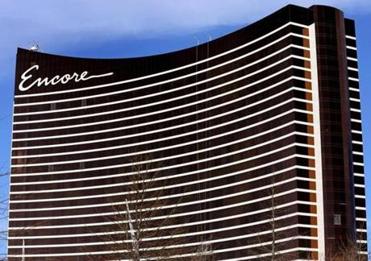 The Mass. Gaming Commission imposed a $35 million fine against Wynn Resorts, though the ruling still lifted a cloud cloud of uncertainty from over the company’s $2.6 billion casino.

“I’m excited to see that they’re going to stay in this community,” McLaughlin said Tuesday night.

Massachusetts regulators had launched an investigation into Wynn Resorts after a Wall Street Journal report in January 2018 detailed sexual misconduct allegations against Steve Wynn. The investigators faulted the corporate culture at the resort company, and issued a $35 million fine among other punishments, but allowed the company to keep the license.

The decision was a relief to many in Everett. In a 2013 landslide vote, residents endorsed the resort casino proposal from Steve Wynn by an 86 percent to 13 percent margin. Some city residents reiterated their support after Tuesday’s announcement.

He said the casino project revitalized what had been a blighted property in the city. Lattanzi was hopeful the casino would lower real estate taxes and bring with it improved roads and playgrounds.

“It’s going to be a destination city,” he said. “Everyone is going to know Everett.”

In front of the Target at the Gateway Center, a shopping plaza near the casino, Linda Tran, a 25-year-old city resident, said the project was “annoying because of the traffic,” but added that she was excited to see what kind of nightlife the casino has to offer.

“I think my house is going to go up in value a lot,” she said.

Myra Montoya, a 24-year-old from Chelsea, also was troubled by the traffic implications of the project. Roads are already snarled because of commuters heading to the Bunker Hill area of Charlestown, she said.

“It’s so backed up without the casino,” she said.

She was also concerned about prostitution, which she said was already a significant problem in the area.

Others at the shopping plaza who did not live in Everett spoke glowingly of the casino project.

Austin thought the $35 million fine was not much for Wynn Resorts. “They’ll never go broke,” he said.

“They have the money, I think it should be more,” he said.

Montorosa downplayed the employment impact of the casino, questioning how many non-Everett residents would get a crack at jobs. He said the casino will bring “definitely more crime” to the area and also had concerns about prostitution.

Dorchester resident Steven Provost suggested a casino could bring an uptick in crime, but added that it will also bring jobs.

Lourdes Henriquez, a teacher who declined to say where she lives, thought that concerns about noise and crime were overblown.

“To be honest, I don’t think that it will be that bad,” she said.

Miguel Cua, a 26-year-old chef from East Boston, thought the casino would lead to better policing. He said that people would pay more attention to crime in the neighborhood with the casino open.

Mark Arsenault of the Globe staff contributed to this report. Danny McDonald can be reached at daniel.mcdonald@globe.com. Follow him on Twitter @Danny__McDonald.
Loading comments...
Most Popular in metro
Real journalists. Real journalism. Subscribe to The Boston Globe today.