In the unwieldy field of more than two dozen Democrats, Joe Biden leads in the New Hampshire primary with support from 20 percent of likely voters, according to the first poll of the state since the former vice president officially entered the 2020 contest last week.

A Suffolk University/Boston Globe poll released Tuesday showed Biden followed by Senator Bernie Sanders of Vermont, who pulled support from 12 percent of those likely to cast Democratic ballots in the first-in-the-nation primary, which is expected to be in February.

On the heels of Sanders was South Bend Mayor Pete Buttigieg, with just under 12 percent and Senator Elizabeth Warren of Massachusetts, at 8 percent.

The poll, conducted by the Suffolk University Political Research Center from Thursday to Sunday, surveyed 800 likely Republican, Democratic, and unaffiliated voters. The margin of error for the Democratic primary poll was 4.7 percent and for the Republican primary 4.9 percent.

The survey showed a fragmented field for Democrats. With 24 current and potential candidates polled, the top four contenders accounted for nearly 53 percent of support from those surveyed, while 14 candidates didn’t reach 1 percent. 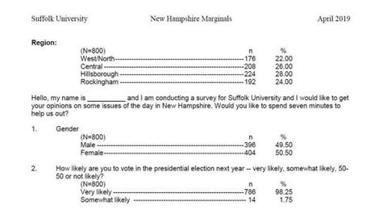 Read the full results of the Suffolk University/Boston Globe poll

“Each one of these [top four] candidates has a distinct and strong base of support,” said David Paleologos, the director of the Suffolk poll. “This means that it will be very hard for anyone else to crack into the top tier anytime soon.”

But the New Hampshire primary is known for being unpredictable. At this point in the race four years ago, Jeb Bush and Hillary Clinton led polls for their respective Republican and Democratic primary contests. Donald Trump won the GOP vote, while Sanders came out on top among Democrats.

Even though Biden hasn’t been in New Hampshire for two years, he leads among both Democratic voters and the state’s independent voters. The state has an open primary system, which means independents — about 40 percent of the state’s voters — can pick whether they want a Republican or Democratic ballot on primary day.

Nine months before the primary, more than a third of Democratic and independent voters thought Biden is the most likely candidate to defeat President Trump.

Count among them Sue Engel, a 41-year-old mortgage broker from Wolfeboro.

“There are so many candidates that I really like in this field, but I feel like Biden is the best bet right now,” said Engel, who said she voted for Hillary Clinton in the 2016 primary.

On the flip side of the electability question is Warren. When Democratic voters who picked another candidate were pressed on why they didn’t select Warren, 18 percent said it was because they didn’t think she could beat Trump, 11 percent said she doesn’t excite them, and another 10 percent said “she comes off as angry.” (More women than men choose this option.)

In 2016, the state’s large swath of independent voters helped Sanders crush Clinton, 60 to 40 percent. In the Suffolk University/Boston Globe survey, Sanders had support from 13 percent of independents.

But even while Biden leads among independents, the survey also showed likely Democratic primary voters overwhelmingly support a series of proposals that have become mainstays among the most liberal candidates in the field.

“What this demonstrates is . . . the Democratic electorate moving to the left but still mindful that the goal is defeat Trump and hence Biden,” said Paleologos.

At the same time, Buttigieg, who ranked third among Democrats, seems to have capitalized on his recent buzz in the race. Jeffrey Gorman, of Nashua, was interested in former representative Beto O’Rourke of Texas, but he said that has since “faded” and now he likes Buttigieg.

“He seems to have all the qualities that I want in a candidate. He is smart and honest and shares my values,” said Gorman, 56, a political independent who works in sales.

Also among Democratic primary voters, Buttigieg, who is gay, has the support of 1 out 3 people who live in a household with someone who identifies as either lesbian, gay, bisexual, or transgender.

Rounding out the Democratic primary field were Senator Kamala Harris of California, in fifth spot with 6 percent, O’Rourke and Senator Cory Booker of New Jersey with 3 percent, and New York entrepreneur Andrew Yang, Senator Amy Klobuchar of Minnesota, and Representative Tulsi Gabbard of Hawaii — all with 1 percent support. Representative Seth Moulton, who announced his bid last week, did not register any support among New Hampshire voters.

As for Trump, the poll showed the president with a large bloc of support among likely Republican primary voters.

In a head-to-head contest against William Weld, the former Massachusetts governor who announced his bid for the GOP nomination last month, Trump wins, 72 percent to 17 percent.

Trump’s campaign manager said this weekend that he hopes to flip New Hampshire in the general election. Trump lost the state to Clinton by four-tenths of a percent — the second-closest finish of any state, behind only Michigan.

Trump currently has a 41 percent approval rating among the 800 likely New Hampshire general election voters in the survey.

In a match-up against an unnamed Democratic nominee, Trump is behind, 43 percent to 40 percent, with 11 percent undecided.

The margin of error for the general election poll was 3.5 percent.

Correction: Due to incorrect information provided to the Globe, an earlier version of this story misstated the level of support for Representative Seth Moulton in New Hampshire.