The Massachusetts Democratic Party is asking both federal and state regulators to investigate the conservative group Massachusetts Fiscal Alliance, amid revelations that it took most of its funding from a nonprofit that it created.

The state party — which has long feuded with MassFiscal over its mailers targeting Democratic state lawmakers — filed complaints with the Internal Revenue Service, the state Department of Revenue, and the state Office of Campaign and Political Finance on Tuesday, charging that MassFiscal is running a “scheme” that could potentially run afoul of the law.

The party’s complaints come days after the Globe published a story detailing the unusual relationship between MassFiscal and the nonprofit, Fiscal Partners Inc., which its leaders created in 2016.

Registered as a business group, Fiscal Partners has no website, shares the same address as MassFiscal, and does not disclose the entities that paid it hundreds of thousands of dollars in member dues in 2017, the most recent year for which data are available.

But most of that money went to one place that year: MassFiscal, which took $460,000 in targeted grants from the nonprofit, accounting for more than 70 percent of its total contributions. 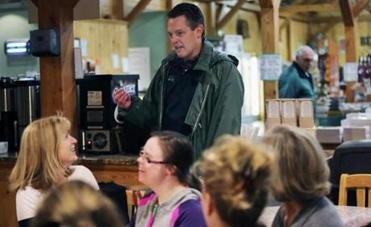 MassFiscal’s biggest funder is a nonprofit it founded

MassFiscal, which also has nonprofit status, is generally not required to publicly identify its donors. But before a law was passed creating new disclosure rules, it regularly fanned out election communications about Democratic legislators, riling the state’s majority party. By taking funds through another nonprofit, it could make it more difficult for campaign finance regulators to determine who’s fueling MassFiscal’s cash flow should it dip into election-related work.

“Among the concerning revelations in the recent report, in addition to serious tax avoidance issues, is the discovery that Fiscal Partners, Inc. may have been set up to shield individual and corporate donors from the disclosure required by law,” Gus Bickford, the state party chair, wrote in a complaint to the OCPF.

In a separate letter to the IRS, Bickford charged that it appears the set-up could be helping “facilitate an illegal money laundering scheme” while offering its donors tax benefits through Fiscal Partners, a registered 501(c)(6).

Paul D. Craney, president of Fiscal Partners, has said the business group was not created to shield donors to MassFiscal. In a statement Tuesday, he dismissed the party’s complaints as “baseless attacks” and accused it of regularly using the complaint process to “grab quick headlines.”

“Their chief goal is intimidation of our organization and its members, as well as misleading the public on the nature of our work,” said Craney, who also serves as MassFiscal’s spokesman.

The complaint to the OCPF is the party’s third against MassFiscal in six years, according to Bickford.