Like Monday Night Football, election night in America has become a made-for-television event. Political junkies will have their pizza ordered, their favorite cable news channel on, and BostonGlobe.com reloading on their second screen.

In that spirit, we offer you an hour-by-hour guide of how to follow election night. With this roadmap, you can get a handle on the real story of the evening before the pundits get around to it. All times below are in Eastern Standard Time.

The earliest results in the nation will come in from Indiana and Eastern Kentucky. Fortunately for us, some of those early returns could be revealing.

In Indiana’s high-profile US Senate contest, Democratic incumbent Joe Donnelly is seeking reelection against businessman and former legislator Mike Braun. Indiana is Trump country (and the home state of Vice President Mike Pence), but Donnelly is slightly ahead in most recent polls.

If Donnelly loses, the Democrats’ hope of taking over the US Senate is probably lost, too. 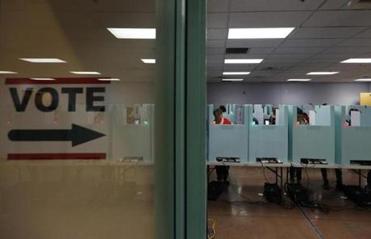 Anxious Republicans privately feared the House was slipping away, but expressed confidence in their narrow Senate majority.

Kentucky, meanwhile, will give us an early indication of how the US House races are shaping up. From 6 p.m. to 7 p.m., insiders will have their eyes on Lexington, where Republican incumbent Andy Barr is up against Democratic challenger Amy McGrath, a retired Marine. If McGrath, the Democrat, wins in this solid Republican district, it could be a sign that that Democrats will take the House majority, because they’ll likely win easier contests than this one.

At 7 p.m., most polls in New Hampshire and Vermont close, but the contests in those states are only mildly interesting. The real drama will be farther south. Both Florida and Georgia have open governor’s seats, and both races feature a black Democratic critic of the president squaring off against a white, Trump-supporting Republican.

Florida, Georgia, and Virginia, are also home to a total of eight competitive House seats. And Florida has a competitive US Senate election, where Democratic incumbent Bill Nelson has led Republican Governor Rick Scott by a few points. If Nelson can’t hang on to his seat, the math gets tricky for Democrats to retake the Senate majority.

Polls in some 20 states — including Massachusetts — will close at 8 p.m., just after Ohio, West Virginia, and North Carolina wrap things up at 7:30 p.m.

Now we’re getting to the some of the nation’s marquee races: the initial returns from the Texas US Senate race, plus four competitive US House races in New Jersey and another eight in Pennsylvania.

Meanwhile, two of the most vulnerable Senate Democrats — North Dakota’s Heidi Heitkamp and Missouri’s Claire McCaskill — will be nervously waiting for the results to trickle in.

By 9 p.m., we should begin to have a sense of the big picture. If Democrats’ promised “blue wave” materializes, it should be evident. We should also expect to hear speeches from US Senator Elizabeth Warren and Governor Charlie Baker around now.

Polls are now closed in 12 states, which means 41 states have completed voting. The questions of the hour: Which woman will win the Arizona Senate seat being vacated by Republican Jeff Flake? And: Will Wisconsin Governor Scott Walker win re-election?

Party strategists will have their eyes on four US House races this hour: Arizona’s 2nd District, Colorado’s 6th District, and Minnesota 2nd and 6th Districts.

But those are the swing districts. If Democrats are on fire, this is also the hour when the bottom could fall out for Republicans, and the House majority could be called. For example, Democrats, who need to flip 23 seats could pick up as many as nine in New York State during this hour alone.

With the House possibly decided, during the 10 p.m. hour, the polls close on hotly contested Senate races in Montana and Nevada. Nevada could be more important, because Dean Heller is the most vulnerable Senate GOP incumbent in the nation, and Democrats probably need to win his seat to seize the majority.

Also likely taking the stage during this hour: Mitt Romney, who is expected to easily win a US Senate seat from Utah.

The returns in California could be a very big deal, especially if control of the House is still up in the air. After all, there are 10 competitive US House races in the state.

But the final results in these races, if they’re close, could take weeks to tabulate. So no need to stay up late.

You’re still up either because Senate returns are really slow, or you are obsessing over Alaska’s toss-up gubernatorial race.

Tight Senate contests out West could still be trickling in by the time Alaska precincts close up shop. But you can catch up in the morning.