The increase in segregation of the Boston Public School system — decades after court-ordered busing strove to help diversify the city’s schools — will worsen divisions among families along racial and economic lines, parents and education advocates said Sunday.

The concerns came a day after the Globe reported that more of the city’s schools are segregated now than they were two decades ago — in many cases, leaving students of color increasingly isolated in low-performing schools.

“It is almost as if the city is turning its back on our kids,” said Audrey Martinez-Gudapakkam, whose daughter attends Winship Elementary School in Brighton.

Matt Cregor, education project director at the Lawyers’ Committee for Civil Rights and Economic Justice, said that if the city’s current school assignment system remains in place, segregation will only worsen.

“Our current student assignment system hoped, in part, to maintain some racial integration without thinking or talking about race,” Cregor said. “By 2018, our city should know better than to close our eyes and hope for the best on this.” 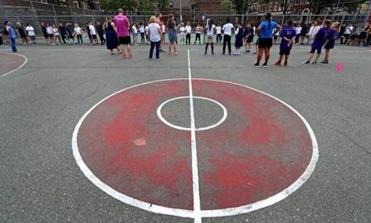 An alarming pattern of racial segregation has re-emerged in the Boston Public School system over the last two decades, according to a Globe analysis.

The Globe reported Sunday that nearly 60 percent of the city’s schools are intensely segregated, up from 42 percent two decades ago. In those schools, students of color fill at least 90 percent of the seats.

The shift in student demographics has also increased the number of majority-white schools from two to five over the past two decades. Student performance and extra support from families, including fund-raising, can differ greatly between majority-white schools and intensely segregated schools, the Globe’s review found.

A Northeastern University report released last month said the computer system used to assign students to schools is exacerbating segregation and leaving many black and Hispanic students in low-performing schools.

Barbara Fields, who worked in the city’s Office of Equity for 25 years and whose job included helping to implement goals mandated by court-ordered busing, said the city is moving in the wrong direction on desegregating its schools.

“I think the main thing that happened is that this matter is no longer a priority for the district, that all students have access to what the district has to offer,” Fields said Sunday. “We have lost the drive, citywide, to deal with the issue of equity in education.”

Michael Loconto, the chairman of Boston’s School Committee, disputed that in a phone interview on Sunday.

“You might come away [from the Globe story with] the idea that there are five good schools [in the city], and that is not true,” he said.

The school district has opened up seats in its exam schools to allow more students to attend, and the city now has 46 schools that are rated level 1 or level 2 by state education officials, Loconto said.

He pointed out that the students in Boston’s school system are predominantly people of color. The schools enroll 57,000 students, of whom nearly 86 percent are people of color, according to district data.

‘It is almost as if the city is turning its back on our kids.’

That said, Loconto asked what the city’s priorities should be in promoting diversity in its schools: spreading out white students, hiring more staff that reflect the demographics of the school, or offering more education on other cultures?

Officials have been working to help underperforming schools by moving toward a more equitable distribution of resources, and officials have looked at whether school spending on transportation — about $122 million last year — would be better spent on schools themselves.

“There is no one silver bullet. This is a big, complex system. . . . We don’t turn on a dime; this is work that is ongoing and will continue,” Loconto said.

Rahn Dorsey, Boston Mayor Martin J. Walsh’s chief of education, said the assignment policy tries to give a family a choice of schools close to home, while providing access to high-performing schools, he said.

In his conversations with education advocates, he found they want “a guarantee that [families] can access higher quality schools,” he said.

Loconto and Jessica Tang, president of the Boston Teachers Union, pointed to inadequate state funding as an issue.

“The lack of racial equity in Boston schools is fueled and perpetuated in many ways by a systemic lack of adequate state funding, including a broken and biased state accountability system and a failure to adopt recommendations set forth for updating school funding formulas,” Tang said in a statement to the Globe.

City Councilor At-Large Annissa Essaibi-George said the current schools assignment process isn’t working, and the district should take half the money spent on transportation and reallocate it to support underperforming schools.

“I think we would see vast improvement within a school year,” she said.

City Councilor Lydia Edwards said in an e-mail that regardless of the school assignment policy, “every school should be a quality and fully funded school.”

“But when schools are not integrated in an underfunded educational system, lower-income families cannot provide the same level of outside resources as middle- and upper-income families,” she said.

The goal of court-ordered busing was to provide black students — and later, Hispanic students — the same access as white students to quality education, said Fields, who worked from 1981 to 2007 in the city’s Office of Equity. Part of Fields’s job was to attend court hearings associated with the order through 1994, she said, and report the city’s progress to the superintendent of schools.

“The bottom line, all children [would have] equal access to resources, and they would therefore have a good education,” Fields said.

Today, city schools that are low-performing don’t have the resources they need, said Fields, who blamed a lack of a political will to address the disparities between schools. “If this was a real priority, educating Boston’s children . . . we could do much better,” Fields said.

Martinez-Gudapakkam, whose daughter is entering first grade at the Winship school, said she wanted her child to attend a diverse school where she would be exposed to students of other cultures and traditions.

“I really want her to be a good citizen, a leader for the 21st century, and she is only going to gain those skills by living in, and making friends in, a diverse community,” Martinez-Gudapakkam said.

Over the past two decades, Winship showed progress creating a more diverse student body. In 1997-1998, the school was about 63 percent Hispanic, 16 percent black, 13 percent white, and 8 percent Asian.

By the 2017-18 school year, Hispanic and white students each made up roughly one-third of the school’s population, with black students making up about 17 percent and Asian students about 15 percent.

Winship enrolled 221 students in pre-kindergarten to grade 5 in the 2017-18 school year, according to state data.

Martinez-Gudapakkam, who is Mexican and whose husband is Indian, said attending a diverse school will help her daughter to be proud of her heritage. “I want Boston Public Schools to succeed. I want students growing up in diverse schools,” she said.

Another Winship parent, Liz Sullivan, was worried families’ experiences with their schools can be shaped by the ability of parents to devote time to fund-raising and volunteering. If parents have more than one job or other demands on their hours, it can limit how much time they devote to their school, she said.

At Winship, where Sullivan’s daughter is entering first grade and her son will start kindergarten, students benefit from the strong support of teachers and families, she said.