That maddening traffic jam that snarled traffic throughout the Financial District for roughly four hours of rush hour Monday night? The Rev. Vernon K. Walker was one of the few people who looked upon it and saw a thing of beauty.

Walker (we’re not related) is one of the leaders of the Poor People’s Campaign of Massachusetts, the group that organized the action. In the end, a group of roughly 50 protesters pulled off the protest.

“We were raucous, we were vibrant, ebullient, energetic, and happy to be out there because of the social inequality that exists on so many levels,” Walker told me. “We were happy to stand up for 140 million residents who live in poverty, including 2.9 million in Massachusetts.”

The campaign is the local iteration of a national campaign, with 40 groups nationwide devoted to engaging in civil disobedience every Monday this spring. The Poor People’s Campaign takes its name, and much of its agenda, from a project Dr. Martin Luther King Jr. launched shortly before his death in 1968. It is spearheaded nationally by the Rev. William Barber and the Rev. Liz Theoharis, activist ministers who seek to cobble together a politically potent grass-roots coalition of poor people and their allies.

Thus far, most of the Massachusetts protests had taken place at or around the State House. Monday’s was the first one to stop traffic. 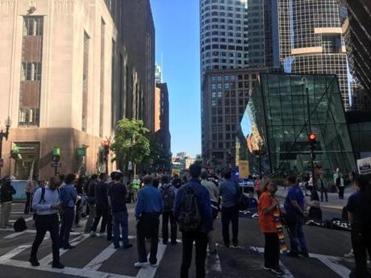 A group of protesters calling for a higher minimum wage blocked a busy intersection in Boston’s Post Office Square for several hours.

“Praying on our knees is not enough,” Walker said. “We have to pray with our feet too.”

You could reasonably ask how stopping rush-hour traffic on Congress Street is going to address issues of poverty or environmental racism. But supporters of the nascent movement believe they stand in a grand tradition of civil disobedience, and that they are addressing inequities that are getting worse by the day.

A Philadelphia native, Walker, 31, came to Boston a few years ago to attend the Boston University School of Theology. He is associate pastor at the Berachah Church, a small, nondenominational congregation in Dorchester.

Walker met Barber during an appearance in Jamaica Plain two years ago and quickly became a follower. The current campaign, he says, is a “fusion movement,” meaning that it is a loose coalition of activists for various liberal causes, a proverbial big tent. Walker claimed that even some stranded motorists Monday joined the protest when they saw what was going on.

The Financial District seemed like a logical choice of a protest, he said, because financial institutions symbolize much of what they protesters are against. Among the protesters’ causes are an increase in the minimum wage and increased spending on antipoverty programs.

“It stands on the shoulders of what Dr. King started in 1968,” Walker said. “He focused on militarism, poverty, and racism. The campaign believes in the original platform but we’ve added ecological devastation and access to affordable health care. So we’ve added those to Dr. King’s three points.”

After four hours — four hours of honking horns, hovering helicopters, and media attention — the point had been made and the group dispersed. Though arrests are a regular feature of Poor People’s protests, no arrests were reported Monday.

“I believe the rich live comfortably and the poor live uncomfortably,” said Savina Martin, one of the organizers. “If we have to make people uncomfortable for a few hours, that’s a small victory.”

Critics might argue that this was a publicity stunt, to say nothing of a major inconvenience. Both those charges might well be true. But at this time of the deepest political polarization in memory, old-fashioned modes of protest feel oddly appropriate. At any rate, this was the last protest currently planned in Boston. Next up is a nationwide rally in two weeks in Washington, D.C.

“We felt very proud and we will continue to keep this energy going,” Walker said. “We’re just going to keep it moving and let the lamp of justice burn bright.”

Adrian Walker is a Globe columnist. He can be reached at adrian.walker@globe.com.
Loading comments...
Most Popular in metro
Real journalists. Real journalism. Subscribe to The Boston Globe today.