Melvin Rabin, the Natick psychologist accused of having sex with a patient, has surrendered his license in a letter to regulators acknowledging that he put the patient “at risk of harm” and failed to maintain professional boundaries.

The state Board of Registration of Psychologists accepted the license surrender Friday, more than two years after the patient, Lisa Grover, filed her complaint. State law and professional ethics prohibit psychotherapists from having romantic or sexual relationships with patients.

Rabin’s resignation was dated Tuesday, the day after the Globe reported on Grover’s allegations that Rabin violated therapist-patient boundaries, starting with phone calls and flirtatious e-mails and progressing to hugs and kisses and eventually sex on his office couch.

Grover, who went to Rabin for help recovering from childhood sexual abuse, said the experience was emotionally devastating.

When she learned Friday that he had surrendered his license, Grover said, “This is a huge step in my healing.” 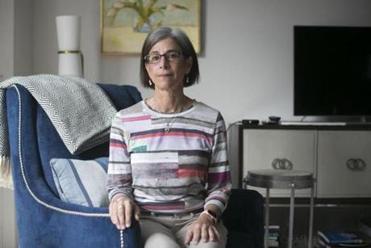 Lisa Grover alleges that psychologist Melvin Rabin violated ethics and state law, and harmed her emotionally, by luring her into a sexual relationship.

She also urged other victims of sexual abuse to speak out.

“Secrecy keeps you a victim. By speaking out, you become a survivor,” said Grover, 58. “I feel like I have been heard. I feel like justice has been served.”

Sex between a psychotherapist and a patient is considered one of the most serious breaches of professional ethics, so serious that it is a crime in half the states, although not in Massachusetts.

In his letter, Rabin, who is 72, said he has stopped practicing, canceled his office lease, and terminated his clients. He also surrendered his New Jersey license and pledged that he will not attempt to renew or reinstate any license to practice in any jurisdiction.

The psychology board discussed Rabin’s case in a closed session at its monthly meeting Friday. After the board voted in open session, board chairman Robert Carey Jr. and executive director Erin LeBel declined to answer questions.

Massachusetts regulators did not speak with Grover until 11 months after she filed her complaint in February 2016. Grover had e-mails and voice mails from Rabin to back up some of her allegations.

In May 2017, the board issued an Order to Show Cause, indicating that it found Grover’s allegations had merit and that Rabin’s alleged actions constitute “gross misconduct” and violations of professional standards.

But no further public action was taken until Friday’s vote to accept Rabin’s license surrender. During this time, Rabin had an unrestricted license and continued to see patients.

A spokeswoman for the state Division of Professional Licensure, which oversees the psychology board, said Friday that an investigation of Grover’s complaint had been completed by August 2016, recommending further action. After that, the board sought to meet with Rabin and met with repeated delays. There were “long discussions between the licensee’s attorney and the board,” she said.

The spokeswoman said the division takes complaints of professional misconduct seriously and in this case worked “diligently with all parties to resolve this complaint as expeditiously as possible.”

Jan Wohlberg, a founder of the online support network Therapy Exploitation Link Line, or TELL, said that disciplinary boards “bend over backwards to give due process to the professionals, but don’t extend the same courtesy to consumers.”

The psychology board had another, faster option. State law gives it the power to immediately suspend a psychologist’s license before holding a hearing “if the board finds that the health, safety, or welfare of the public warrants such summary action.”

With such a “summary suspension,” the board can prevent someone who might be dangerous from practicing while it investigates the allegations.

But the psychology board has invoked that power only twice in the past three years. In contrast, the state Board of Registration in Medicine — which has the same power, described in statute using the same words — has issued 15 summary suspensions since the beginning of 2015.

Wohlberg said that psychology board members need more training in sexual misconduct. “They need to understand that this is serious stuff,” she said. “Maybe 2 percent, maybe 5 percent — a very tiny percentage — of these cases are not legitimate. It’s hard to come forward.”

Although Rabin has no license, Massachusetts law permits unlicensed professionals to offer counseling. Wohlberg said she has known of clinicians “who had their license removed and reinvented themselves in various ways, including calling themselves ‘counselors’ or ‘life coaches.’ ”