More from The Board Game series:

Second in an occasional series.

Not long after Stephen G. Kasnet became chairman of Columbia Laboratories, he realized there was a problem.

Every person on the board was a white man, even though the Boston company — now called Juniper Pharmaceuticals — focuses on developing therapies for women. “Obviously, a woman’s health company ought to have a woman on the board,” Kasnet said.

So he persuaded an experienced attorney he knew, Valerie L. Andrews, to join the board in 2005. Chief executive Frank Condella later recruited another woman who oversaw drug development at a biotech company. And today, three of the seven seats are filled with women or minorities.

Most companies have been slower to change.

A Globe survey of publicly traded companies in Massachusetts — the most extensive examination of board diversity conducted in the state — found 80 percent of directors were white men, even though white men account for just 36 percent of the state’s population. 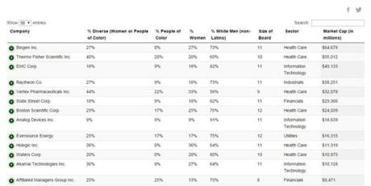 A Globe survey of publicly traded companies in Massachusetts found only 20 percent of board members were women or people of color.

“That is very concerning, and there is no excuse for it,” said Micho F. Spring, the New England president for public relations firm Weber Shandwick, who also serves on the board of a publicly traded bank in the Midwest. “Having boards that reflect the diversity of our region should be an urgent priority in today’s Massachusetts.”

Many company executives insist they are trying to diversify their boards, but critics complain they are moving at a glacial pace. A national survey found women and minorities accounted for 26.7 percent of seats at Fortune 500 companies in 2012, the most recent year available, up slightly from 25.5 percent in 2010, according to the Alliance for Board Diversity , a partnership of business groups. Smaller and midsize companies, which account for the vast majority of firms both in Massachusetts and nationwide, are generally even less diverse.

“The numbers are showing some modest level of progress, but they are still very disappointing to say the least,” said Bentley University president Gloria Cordes Larson, who sits on two corporate boards.

Though their positions are typically part-time, board members play a critical role overseeing most corporations. Directors are in charge of hiring and firing chief executive officers, ratifying key decisions, and helping to set the long-term direction and policies of the companies. On Wednesday, the Globe reported that pay for directors has risen far faster than wages for average workers, with some directors earning more than $1 million a year.

Corporate watchdogs say the lack of diversity in corporate boardrooms matters because it potentially means boards are overlooking talented executives who could help the companies. And advocates argue that diverse boards are more effective than homogenous groups.

“It’s a missed opportunity,” said Jackie VanderBrug, a senior vice president at US Trust who is based in Boston. When boards are more diverse, she said, some studies suggest “there’s less group-think, more dialogue, and more of a sense of support for a diverse point of view.”

And a Wake Forest University paper last year found companies with more diverse boards pay higher dividends and enjoy more stable stock prices. The study, which is being considered by an academic journal for publication, examined the performance of 2,000 companies from 1998 to 2011.

In Massachusetts, gender diversity on corporate boards has received more attention than racial diversity, thanks in part to the work of the Boston Club, a prominent women’s leadership group that tallies the number of women on boards every year. In 2014, the group found women held 15 percent of seats at the largest 100 public companies, up from 9 percent in 2003. The group plans to release its 2015 report at a breakfast headlined by Governor Charlie Baker on Friday.

In addition, the Legislature approved a symbolic resolution in October that urged boards to have at least two or three women (depending on the board’s size) by the end of 2018.

‘If you only look for someone who is a CEO at another public company, you are going to find it hard to create diversity.’

But researchers haven’t historically collected data on the total number of minorities serving on Massachusetts boards, in part because it is more difficult to collect than information on gender.

“The data doesn’t exist,” said Patricia Flynn, an economics professor at Bentley, which helps prepare the annual Boston Club surveys. Flynn noted it’s sometimes impossible to discern ethnicity simply by looking at companies’ websites and financial reports. The federal Securities and Exchange Commission has yet to act on a recent petition by public pension plans to force companies to disclose that information.

The Globe gathered its data by calling and e-mailing almost every publicly traded company in Massachusetts. The Globe ultimately obtained data from 184 companies, accounting for the vast majority of the public companies.

Like the Boston Club, the Globe found that 15 percent of directors on Massachusetts companies were women.

Additionally, the Globe discovered only 7 percent of directors were black, Asian, Latino, Native American, or multiracial, even though minorities make up nearly 26 percent of residents in Massachusetts.

And 20 percent of firms, including Entegris Inc. and Pegasystems Inc., said they had no women or minorities on their boards.

Entegris vice president Steven Cantor said the Billerica technology company wanted to recruit a female or minority member for the last two board openings. But he said the company’s top priority was hiring retired senior executives from the same industry — semiconductors and microelectronics — and couldn’t find any qualified female or minority candidates for its nine-member board.

“We absolutely did look,” Cantor said. “Frankly, there aren’t a lot of experienced women senior executives in the industry.”

Many companies blame the lack of diversity on the pool of candidates: Companies typically look to current or former chief executives at publicly traded companies and people who have experience serving on public boards. But those people are, by and large, older white men. Nationally, only 22 of the 500 largest public companies are led by women, according to Catalyst, a group that works to expand business opportunities for women. And only five Fortune 500 CEOs are black.

Cantor said the board expects to add women or minority board members as directors step down.

Some diversity advocates are not buying the argument that it’s almost impossible to find qualified women or minorities. Several business groups said they have long lists of female and minority members who are ready to move into board slots, including experienced technology managers. Too many companies, critics say, look only to people they already know.

“It’s just a matter of those companies being curious enough to look outside their common and frequent networks,” said Ronald C. Parker, president of the Executive Leadership Council, which has helped more than 130 African-Americans land spots on corporate boards.

And Larson, the Bentley president, said companies also need to consider tapping experienced professionals outside of the corner office. “If you only look for someone who is a CEO at another public company, you are going to find it hard to create diversity,” she said.

Some companies said they haven’t had much turnover, reducing the opportunity to add women or minorities. “Our board has been fairly stable in recent years,” said Lisa Pintchman, a spokeswoman for Pegasystems, a software company in Cambridge that has no women or minorities on its seven-member board. Pintchman noted the board has hired only one director since 2009.

Other companies would not reveal how many minorities serve on their boards.

Nearly three dozen Massachusetts firms didn’t respond to repeated calls and e-mails, asserted they didn’t know, or declined to provide the information for other reasons.

“We do not gather information on our board members’ ethnicity because our board members are selected based upon their capabilities,” said Elizabeth Sharp, vice president of investor relations at Smith & Wesson Holding Corp., the Springfield firearms maker.

Companies that withheld the data included TJX Cos., TechTarget Inc., and TripAdvisor Inc.

“We don’t view diversity so narrowly as to only mean color, so it doesn’t seem appropriate to simply note the board members that are ‘people of color,’ ” said TripAdvisor spokesman Kevin Carter.

On the other hand, some firms were happy to boast about their success finding women and minority board members.

Avid Technology Inc., the Burlington maker of video-editing software tools, said five of its seven directors are women, people of color, or both — the highest percentage of any company the Globe surveyed.

“It has been a conscious effort,” said Avid chief executive and chairman Louis Hernandez Jr., who is Latin-American. “We are proud of the diversity that we have.”

Hernandez said having a diverse board is particularly important for a company such as Avid, which has offices in 22 countries and customers in about 130. “We just feel it is important to make sure we have the type of diversity that reflects our user base,” said Hernandez, whose mother immigrated from Mexico.

“It does take a little bit of extra time to find the person to meet all the qualifications,” said Hernandez.

Kasnet, who recently retired from Juniper, said other directors at the specialty drug maker didn’t initially think much about the lack of women on the board because they were focused on other issues, such as developing products, when he joined a decade ago.

But Kasnet said the company was struggling at the time and he thought the board needed new people with new ideas. As part of that change, Kasnet said, it only made sense to add people who could also better relate to those using its products — women. “It was time for some new thinking,” Kasnet said.

The new board members, Kasnet said, immediately made a difference. He said the female board member he recruited, Valerie Andrews, was a skilled listener. Instead of immediately jumping into a debate, Andrews was often able to take a step back, identify the core problem, and come up with a simple solution. “She never got lost in the details,” he said.

Kasnet said he’s surprised other companies haven’t made more progress in diversifying their boards, noting that women and minorities now make up such a large portion of the people he encounters at business meetings.

“It’s not the good old boy’s network anymore,” he noted, “and it shouldn’t be.”