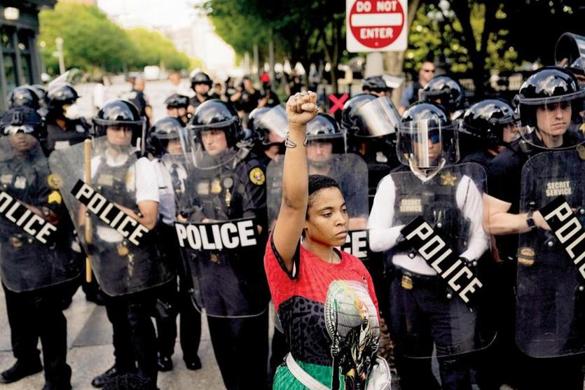 An America where some breathe free, and some can’t breathe at all.

‘He must have completely fallen apart’

Prosecutors say that Ingolf Tuerk, the former head of urology at St. Elizabeth’s Medical Center, has admitted to strangling his estranged wife in the midst of a bitter divorce and dumping her body in a small pond near their home in Dover.

‘We will not accept it’: Hundreds protest in South End in support of George Floyd

On the basketball court at Peters Park, protesters knet, practicing socially distance and wearing masks, to demonstrate police brutality. Loudspeakers played a song about Black men and women who had been killed by police in recent years. “Eric Garner, say his name. Say his name,” the music blared as the protesters kneeled silently.

Many people say they’re not eager to resume “normal” activities, even if the state says it’s OK to start doing so with parameters in place.

Trey’von is ready to join a family of his own

Trey’von is a playful seven-year-old boy of Hispanic descent. He can be shy when meeting new people but once he is comfortable, he is affectionate and easily engaged.

The building was closed to the public for nearly five hours Saturday, after a group of Black Lives Matters protesters gathered in front of the station, and two men in a truck pulled up with a gun, officials said.

50 new deaths in Mass. due to COVID-19, but average number of cases continues to drop

As many as half the Archdiocese of Boston’s 280 parishes could reopen and hold public Mass Sunday. Even as its churches reopen, the archdiocese will continue to offer dispensation from the obligation to attend Sunday Mass for the foreseeable future,

About 2,000 people held a peaceful rally in Providence to protest the death of George Floyd, a black man allegedly killed by a white police officer in Minneapolis.

Abraham is a Metro columnist. Her work appears on Thursdays and Sundays.

Farragher is a Globe columnist and associate editor. He spent eight years as editor of the Spotlight Team.

Walker has been a columnist for the Metro section since 1998. His column runs Mondays and Wednesdays.

He bought the fencing coach’s house. Then his son got into Harvard

The Needham house was assessed at $549,300, but sold for nearly a million dollars. The buyer, who never lived a day there, would sell it 17 months later at a substantial loss in what may become the next chapter in the national debate over fairness in college admissions.

Track the coronavirus pandemic in Massachusetts to its roots and you find a story driven by heroics, ingenuity, error, pain, and a hard question: How could a state famous for health care excellence have suffered such a vast loss of human life?

Virus testing in towns across state a mixed bag. Eight of every 100 people have been tested.

More than 550,000 people have been tested in Massachusetts.

Boston police said Saturday morning that 11 people face criminal charges and four Boston police officers were injured during a South End protest Friday that drew hundreds to demonstrate over the killing of George Floyd, a Black man who died in Minneapolis police custody.

Everyone — including Trump — has an opinion about this potential COVID-19 treatment, and that’s making it hard to find out if it works

In reality, no one knows whether hydroxychloroquine is a safe or effective treatment for COVID-19.

‘When one of us dies, we all die’: For many Black Bostonians, Minneapolis suddenly feels close to home

Black people in and around Boston found themselves in the familiar position of leaning on one another.

Mask-wearing has become routine, save a few scofflaws

As people emerge from their home confinement, some choose to wear masks, while others don’t, even when they know the rules.

District leaders said they hope to recall the staff and open at full capacity in the fall, but a $12.8 million town budget gap has forced the district to make hasty decisions on how to reduce expenses immediately.

The cuts at BPS's central office, part of a broader shift toward school-based professional training, come through a combination of layoffs and reassignments.

Restaurants could open as soon as June 8, if trends are still promising, officials say

Restaurants could open as soon as June 8, but only serving outside and only if the public health metrics continue to look good, state officials said.

Baron, who was Globe editor from 2001 to 2012 before taking the Washington Post’s top newsroom job, addressed the Class of 2020 during an online commencement ceremony Thursday.

The 2020 Marathon — which had already been postponed from April to Sept. 14 due to coronavirus — will be held as a virtual event, the BAA said.

Cape Cod will be open for business this summer, albeit in a limited fashion as the state economy gradually reopens amid the COVID-19 pandemic, officials said Thursday.

With little public attention at the time, Massachusetts state officials opened a $1.75 billion line of credit to help plug budget gaps ripped open by the novel coronavirus, a grim fiscal reality that, one watchdog warned, could hang over the state for years.

Emergency day-care programs, which have kept children healthy and engaged amid the coronavirus pandemic, could emerge as models when day-care centers are eventually allowed to reopen statewide.

The United States has seen a larger outbreak of COVID-19 than any other country, and its reopening experience could be more fraught than others'.

Man, 43, identified as victim of fatal shooting in Franklin Field where 4 other men were wounded

A makeshift memorial was growing in the heart of a Dorchester housing development Thursday in the wake of a shooting that cost one man his life and left four other men with gunshot wounds.

A lawyer for the home’s superintendent, Bennett Walsh, held a news conference to defend his handling of the outbreak, which has claimed the lives of 76 veterans.

Crowded beaches could be a forecast for summer

Beaches in Beverly and Salisbury were packed with people Wednesday as parts of the coast hit 80 degrees, and some beachgoers failed to follow social distancing guidelines, officials said.

The Everett casino had been paying all of its employees since closing on March 15 because of the coronavirus.

At funeral, Donna Morrissey remembered for her compassion, grace under pressure

Her funeral, held nine days after the state’s churches were allowed to reopen with restrictions, marked a rare public gathering during the pandemic.

For Jase, 3, it takes a village — and a parade fueled by love

Little Jase Russell is continuing the fight for his life this week at Boston Children’s Hospital.

As the Supreme Court weighs their fate, thousands of DACA recipients have become their families’ sole providers because of coronavirus

The stress of awaiting a ruling on whether they will lose their temporary protective status has been amplified for many immigrants brought to the country illegally as children now that their parents are ineligible for federal coronavirus relief because they are not legal residents.

Seth Andrew has been on a strange kind of mission over the past couple of years: to purchase a bucolic yet dying New England college campus and repurpose it as a new sort of educational institution.

Even while celebrated as heroes, health care workers are exhausted and struggling with burnout

As the COVID-19 pandemic drags on, doctors, nurses, respiratory therapists, and other health care workers are struggling with exhaustion from long hours and a crushing emotional toll, even as they're being celebrated as heroes.

Almost all Mass. nursing homes have tested most staff, residents

The baseline testing, which 350 out of 360 nursing homes in the state have now completed, is a good first step, the operators and experts said. But they worry about a second outbreak in the fall, and believe only routine, repeated — and expensive — testing can prevent another disaster.

The governor stressed the T will not be suited to handle normal pre-pandemic commuting levels.

For the first time, state divulges death toll by nursing home, and more than 80 have 20 or more COVID-19 deaths

Wednesday’s disclosure had multiple gaps, suggesting the number of deaths in senior care may be significantly higher than state health officials are reporting.

Once a summertime luxury, outdoor dining may be the rule when restaurants reopen

Your next meal at a restaurant could be served in the street.

Massachusetts colleges and universities are recommending that higher education institutions be held harmless if they reopen and people get sick.

A liquor-license-for-cash program to help Boston restaurants? One city official says there are significant questions

A Boston city councilor’s idea to inject cash into struggling restaurants in exchange for liquor licenses was met with resistance from the head of the city’s licensing board on Wednesday, who said the proposal raises profound questions about legal liability and a potential administrative quagmire.

Remember nurses? They’re still on the front lines. And they still need protection

In Brighton as in facilities across Massachusetts and the country, nurses, doctors, and others are working with equipment that would have been garbage just four months ago.

Attorney General Maura Healey says an investigation of the nursing home will determine if "legal action is warranted."

The first bald eagle nest has been spotted on Cape Cod in more than a century; a good sign for this once endangered species as its presence in Massachusetts continues to grow.

The machine — which Partners HealthCare paid to bring to the Boston area in April — has been criticized by health care workers and government watchdogs, with one group saying it treats nurses “like guinea pigs in an experiment.”

Some say they feel forgotten by the public even as they face constant risk and heartbreak, and make what they see as the most important contributions of their lives.

A retired Massachusetts State Police sergeant Wednesday harshly criticized the Minneapolis police officer videotaped with his knee pressed down on the neck of George Floyd, the most recent fatal encounter between a Black man and law enforcement in the nation.