It wasn’t just luck that we ended up buying apartments a mile down the road from each other. We’ve been friends since seventh grade. A mile was close enough to bring over the extra set of keys if one of us got locked out, needed soup for a cold, or wanted comforting after a personal tragedy.

As luck would have it, smack in the middle (you can count the steps between our houses) is Doyle’s Cafe. The iconic 137-year-old Jamaica Plain bar became our refuge, the other constant in our lives.

Except for the time they changed the french fries. They’d been thick, wide, crispy on the outside, soft in the middle. I remember when our server (a poet I’d seen promoting his new book on our community cable network) put the plate of unfamiliar curlicues on the table. You looked at him, aghast. “What happened?”

When the old laminated, sticky green menus metamorphosed into a dark gilded thing with a fancier font, we tossed it aside and asked: “Do you still have . . . ?”

Then the fries came back. Imagine our relief. 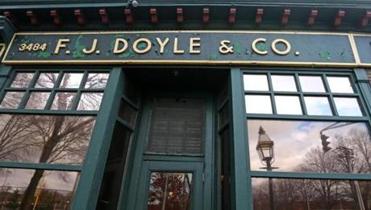 Doyle’s in Jamaica Plain, an iconic pub with a storied political history that first opened in 1882, plans to close up shop and has inked an agreement to sell its liquor license to Davio’s.

As a trauma therapist I know that very few things in life are constant. You and I learned that as kids. In eighth grade, we founded the Dead-Parent Club. We held our meetings on the thick rug between bookshelves, in the school library in the Boston suburb where we grew up. We weren’t exclusive — if your parents were divorcing, or just excessively unpleasant, you were welcome to join.

You made your way: Connecticut, New York, Cambridge, and Watertown. I moved to Israel, then Vermont, Somerville, Cambridge, West Roxbury. Finally, we both landed in JP, adopting Doyle’s as our boardroom.

I’d peruse the bar’s photographs of Boston politicians, remembering trips to the State House and City Hall with my mother, who went toe-to-toe with these guys over welfare reform and housing rights. She died the summer before I met you. We always saved her a spot in our booth at Doyle’s.

We’d get extra napkins — sometimes for crying, or dabbing grease from a hamburger patty. And for the inevitable spills when we were engrossed in conversation. Irish coffee capped with whipped cream and a drizzle of crème de menthe eased my losses and personal failures. “It’s clinically indicated,” I’d explain. You’d opt for a cosmopolitan.

In July 2009, we gave in to the noise from a City Council campaign speech by Ayanna Pressley in Doyle’s event room. A few months later, following the election for his final term in office, Mayor Menino’s boisterous consortium sat at the round table in the corner.

New romances and breakups, old romances recycled — Doyle’s. A parent moved to a nursing home, a friend critically ill — Doyle’s. I lost my job — Doyle’s. You lost a family member — Doyle’s. The young man I mentor was arrested — Doyle’s. When he was released from prison, we watched him eat his Braddock Burger and fries with vicarious pleasure. Volunteering after the Boston Marathon bombings with colleagues from the Israel Trauma Coalition, we all took a breather at Doyle’s.

The announcement last month of the restaurant’s demise brought a flurry of social media posts. “Maybe we can invest funds? Put it into to a community trust?” One defeatist Facebook post read: “Things come and go.”

“ ‘Things come and go,’ are you kidding me?” I called you, indignant about that comment. I didn’t want to give up.

For 20 years, our Jamaica Plain had room for the three of us: Me in my artist’s loft; you in your condo in a three-decker; and Doyle’s, equidistant and ever present. But lately, our sweet borough’s been stacking cold cubes of steel and glass (with luxury amenities) over family homes, casting shadows over backyards and playgrounds. Rent is out of reach, Doyle’s owner has said. He sold his liquor license to an establishment in the bougie Seaport District and put the property up for sale. (Mayor Walsh may point to outdated liquor licensing in Boston as deserving blame, but I think it’s his city developers gone wild.)

Maybe we’ll figure it all out over crème de menthe and a cosmopolitan — but where? Will we ever find our place?