Frustrated by rising rent, Mattye Dewhirst took to the Internet and stumbled on properties for sale. She realized that with some blood, sweat, and tears, she could afford to purchase a place of her own. Within six months, Dewhirst and her partner, Derek Curley, along with their two dogs and cat, moved into a 1,550-square-foot fixer-upper in East Boston.

Dewhirst left her position at the Society of Arts + Crafts to devote all her energy to renovating the dilapidated three-bedroom house. She acted as the general contractor and did the design work, which includes a 450-square-foot addition slated for later this year. “I told myself that if I was ever going to be a full-time designer, I needed to jump in headfirst,” says the 32-year-old.

Built in 1912, the home doesn’t scream any particular architectural style, so when it came time to decorate, Dewhirst used her imagination. “I daydreamed about what the first owner’s furniture may have looked like,” she recalls. “They likely brought pieces with them and added new ones over time.”

She decided that each room would be loosely inspired by a different five-year period between 1895 and 1965. The most private rooms, which were deemed least important during that era, would hold the oldest furnishings, while the main living space — the home’s showpiece — would be the most modern. Dewhirst says, “Public rooms would be fancier and the most recently updated.”

In the living room, she embraced mid-century modern. A tone-on-tone approach prevails here, with the moldings painted a shade darker than the walls. “Not only is this historically accurate, but you can make some pretty risky color choices when you eliminate a jarring contrast,” says the designer. The focal point is a working fireplace with the original wood mantel — the home’s only salvageable detail other than the moldings, casings, and floorboards. 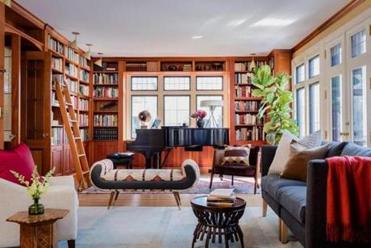 Rehabbing an Arts and Crafts-style stunner in Harvard Square

A historic home lives up to its potential after a gut renovation and a redesign that relied on classic and mid-century furnishings.

The mix of new and vintage décor includes lounge chairs from local antiques markets, contemporary pottery, paintings by Dewhirst’s grandparents, and a framed letter that her grandfather wrote to her great-grandfather after being shot on Okinawa during World War II. The finds Dewhirst is proudest of are the credenza and glass-front cabinet from the Broyhill Saga collection, scored for $80 on Craigslist. “They’re consistently $800 each,” she says. “I thought [the seller] might have left off a zero.”

The saturated-blue dining room takes cues from early-20th-century decorator Dorothy Draper, who was known for splashy color combinations and cabbage-rose chintz. Dewhirst’s grandparents’ dining table, used as the kiddie table for family gatherings once upon a time, stretches the length of the room. Each of the eight mismatched wooden chairs came from a different Craigslist seller and cost $100 or less. “The wood didn’t need to be perfect because I’d be painting them,” says the designer, who reupholstered the seat cushions using dish towels from Anthropologie.

The kitchen was a bit of an archaeological undertaking. “When the team took up the tile floor, they found a second layer underneath,” Dewhirst says. “I told them to keep digging until they found hardwood.” After they did, she painted the floor in a black-and-white checkerboard pattern derived from 1930s interiors. “If they were in good condition, I would have felt guilty painting,” she says of the floorboards. “I taped it all in one night when Derek was at a Bruins game.”

In the master bedroom, bohemian-meets-Victorian style pays homage to the 1890s, when global elements were all the rage. Moroccan-style lanterns hang from the ceiling, and vintage travel posters picked up on Etsy grace the chartreuse walls. “I avoid using this hue because most people don’t like it,” she says. “But it’s my favorite color.” Across from the tapestry-scattered bed, Dewhirst built a decorative fireplace, complete with antique mantelpiece and hand-painted tile surround. “There was a bump-out from the chimney but no fireplace, so I totally faked it,” she says.

Through more than a few challenges, Dewhirst pulled it off. Phase two of the project, which includes a powder room, study, and mudroom, begins this fall. “I was terrified during the final inspection, but at the end, the inspector turned to me for advice on his own house,” she says. “Cue giant sigh of relief!”

■  Hair-raising contractor horror stories — and how to avoid them

■  Rehabbing an Arts and Crafts-style stunner in Harvard Square

■  From cookie-cutter spec house to a family-friendly refuge