ROAN MOUNTAIN, Tenn. — Before you, a deep orange begins to cast the line between dark earth and opening heavens. Behind you, clouds blanket pockets of the valley 3,500 feet below, bathing them in a brilliant white that is cast from a falling full moon.

There are many glorious moments along the 2,181-mile Appalachian Trail. Yet, for sheer stunning, shifting beauty, it would be hard to top this one before the moon yields the skies to the sun along the Roan Massif ridge.

This is a singular place, packing treasures that have drawn botanists and zoologists from around the world for three centuries. For the hiker, the treats follow the season: Fall offers a palette of reds, yellows, and oranges; late summer brings miles of warm blueberries; and in late spring, Roan erupts with luscious purples and reds from what is billed the largest collection of wild Catawba rhododendrons in the world.

At any point on the calendar the main attractions are the vistas. Unlike the White Mountains — their smaller cousins approaching the northern terminus of the Appalachian Trail — the Blue Ridge Mountains rarely have treelines; forests carpet the slopes to the summits.

Not on Roan. Here the open expanses — they are tagged “balds’’ — afford the trekker 360-degree verdant views. 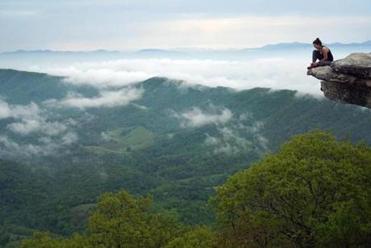 McAfee Knob will get your heart pumping

If you’re looking for one dynamite view along the southern leg of the Appalachian Trail, head to McAfee Knob in southern Virginia’s Roanoke Valley.

Once you park your car at their trailhead at Carver’s Gap at 5,826 feet, Roan is relatively easy to climb. And you need not tent overnight to give your senses an overload of awe. A warning, though: If it is high season for the rhododendrons, you would do well to start very early, say before 8, to beat the crowds.

You’ll climb almost immediately, but the slope is easy. Blasts of reds from rhododendron bushes the size of railroad boxcars will stop you frequently, begging a closer look.

The AT here is not the shin-gouging gulleyed obstacle course we are used to in the White Mountains. It’s almost domesticated, with cushioned mesh underfoot in spots to prevent erosion.

After a few hundred yards, you’ll enter one of the rarest ecosystems on the continent, a red spruce-Fraser fir forest. This vestige of the Ice Age exists only at high elevations in the southern Appalachians.

The contrast is stunning. The brilliant sunlight from the exposed trail is swallowed by the thicket of trees. Once your eyes adjust, you’ll find yourself surrounded by a crowd of the evergreens, their lower halves laddered with bare branches, their tops out of sight, blocked by the dense canopy. Even the smells change, from the crisp air of the fields to a dense, dusky scent. Keep an eye out for Jack in the pulpit plants, where some adjustment of its leaves will present the “minister’’ in his stead, and hemlock trees, whose bright green clumped buds offer a tart and curiously refreshing kick to your taste buds.

Several millenia ago, the red spruce-fir forest dominated Southeastern United States. Now they are only found in a few pockets in these mountains’ upper reaches.

After several turns in the forest, the trail empties back into the open ridge, a change so sudden, the light is initially assaultive.

Within 10 minutes, you’ll be at the top of the first summit, Round Bald. To your north are the mountains of southern Virginia, southwest are the Smokies of Tennessee, and east is North Carolina, with Mount Mitchell, the largest mountain this side of the Mississippi River, hogging the horizon. In this area, the Appalachian Trail at times serves as a state line; a few steps off to your right and you’re in the Tarheel state, to your left and you’re in the Volunteer state.

At most any point, you’re in a state of exhilaration.

The trek up the next mound, Jane’s Bald, is a little steeper. Fiery orange azaleas shout out among the domineering rhododendrons. Slabs of granite flecked with flowering bushes mark the summit.

Next, a spur trail takes you to Grassy Bald, well-named for its broad expanse of grasslands. Near its summit, the trail becomes a tunnel through massive rhododendrons; you’ll walk, ducking, into an enveloping crown of riotous reds, your feet trekking along a trail carpeted in fallen blossoms. Your own cocoon of color.

At the top of Grassy Bald, a collection of rocks holds a plaque: in memory of “Cornelius Rex Peake, a local highland farmer and wildlife enthusiast and advocate.’’ A peak honoring a Peake. Perfect.

The existence of these rare open highlands is a bit of a mystery to scientists. Their creation is probably the result of intertwining factors, with the most powerful force being the grazing by animals perhaps back to prehistoric times. Now, with domesticated animals grazing elsewhere, there’s a compelling debate among those who hold these lands dear whether to maintain them by removing emerging trees (until recently, gnoshing goats were shepherded upon the Balds for that task) or let nature steal back the lands and forest them.

Allowing that to happen would bury the finest gem of the Southern Appalachians.

The natives’ origin story is, as usual, more compelling.

According to a Catawba legend, members of their tribe, eager to show off their military skills, invited the Cherokees to a battle royale. They chose a site high into the heavens, so the gods could better view their heroic deeds. After days of fighting, bodies so caked the mountain that no plant could ever grow here, except the poisonous rhododendron, its previously white blossom now blooming blood red.

Whatever the cause, or causes, these lands have long been a feast for biologists. The Cloudland Hotel nearby, long ago destroyed by fire, could be considered one of the first biology field stations in North America, says Jamey Donaldson, adjunct curator with East Tennessee State University and an expert on the Roans. Scientists such as Asa Gray, the legendary biologist from Harvard University, and environmentalists such as John Muir gathered at Roan in the late 1800s.

Gray, in one of his last books, would declare Roan his favorite among mountains of the east.

“It has exceptional diversity . . . boreal forests, open expanses, alpine plant communities that look similar to those in the White Mountains,’’ Donaldson says. “Roan has the highest concentration of rarity along the entire Appalachian Trail though having only 1 percent of the miles.’’

Among the endangered species are the Carolina northern flying squirrel, for which you may spot crafted houses affixed high in the trees by conservationists, and the spruce-fir moss spider — “you could call it the world’s smallest tarantula,’’ says Donaldson.

Good luck spotting either endangered animal. But, here, you won’t need luck to find this: views that will steel your spirit.

Michael Bailey can be reached at michael.bailey@globe.com.
Loading comments...
Most Popular in lifestyle
Real journalists. Real journalism. Subscribe to The Boston Globe today.