A new food hall is coming to Boston this winter, and already the lineup is looking delicious.

Hub Hall will be located at 80 Causeway St. (next to TD Garden and North Station) as part of the Hub on Causeway development, according to developer Delaware North.

Patina Restaurant Group has announced some of the vendors that will be featured at the new food hall, and some of them hail from just a few blocks away in the North End.

A statement from Hub Hall officials said that the 16,000-square-foot space will feature “local favorites, international cuisines, health-conscious foods and indulgent dishes,” and will host restaurant partners “ranging from beloved Boston brands to new market entries, as well as totally new ventures and concepts from notable chefs who are nationally and internationally known.”

One other quick thing to note: Banners Kitchen & Tap, a sports bar that opened last week, and Guy Fieri’s Tequila Cocina, which will open in the future, are part of the Hub on Causeway development, but are not part of the food hall. 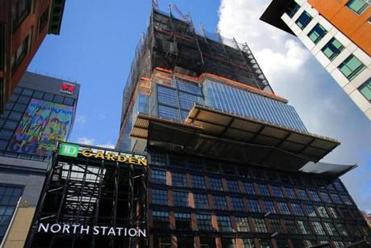 A new Star Market will open Friday in the West End

The mostly subterranean space is located at the new Hub on Causeway complex at TD Garden.

Not all 18 vendors for Hub Hall have been announced — nor has an exact opening date, other than “this winter” — but in the meantime, here’s a running list of who has been tapped to open in the food hall, in alphabetical order.

Douglass, according to a profile penned by First earlier this summer, is one of Boston’s only black male chefs working in fine dining, and perhaps the only chef-owner. Before MIDA, he worked at Radius and Michelin-starred restaurants in New York and Paris, among others. MIDA recently won “Best Pasta” in Boston Magazine’s annual “Best of Boston” awards.

“Today MIDA is thriving, with a friendly local scene, all-you-can-eat house-made pasta on Mondays, a bar where strangers soon become fast friends, and a menu where nothing costs more than $26,” First wrote.

6. The Draft by Banners

The Draft — not to be confused with the dive bar in Allston — aims to bring “a taste of the expansive beer offerings” with 26 premium drafts found at Banners, the massive sports bar that recently opened next to Hub Hall by the same restaurant group. (The concept is a separate endeavor from the actual Banners that opened next door.)

Lily P’s is a fried chicken joint from chef Chris Parsons of Oyster Club, according to First.

A hotspot for tourists and locals alike — known as much for its long lines as its delicious desserts — the iconic purveyor of cannoli and other Italian baked goods will open up shop inside the food hall, Hub Hall officials announced Monday.

Hub Hall officials called it a “must try” tradition in Boston.

“Be sure to get your sweet tooth fix by stopping and getting one (or two!) of their famous cannolis,” they wrote on Instagram.

The popular North End deli known for its sandwiches and specialty grocery items is sure to please those who are looking for a fresh sub.

“Trattoria di Monica and Vinoteca di Monica are two of the neighborhood’s best restaurants — unpretentious, lively, reliable,” Globe food writer Kara Baskin has previously said of the sister spots to Monica’s Mercato. “Yes, this place is so popular that there’s an amusement-park style turnstile in front of the deli counter. Do not try to push through it before your time, lest you end up uncomfortably pressed against the derriere of a hungry patron in search of an Italian sub (a Monica’s special).”

The new wine bar concept from Patina Restaurant Group will feature regularly rotating variety of wines. “The variety of wine will reflect seasonality and mirror the diversity of the food hall partners by showcasing old and new world appellations,” representatives said in a statement.

The oyster bar, headed up by chef Marc Orfaly of Navy Yard Hospitality, will be a “casual, concise, and approachable” version of the popular waterfront restaurants in East Boston and Quincy. Customers can expect a “nautical, boating ambiance” and a menu focused on raw bar items and charcuterie.

“Sullivan’s Castle Island, a South Boston landmark, has been family-owned and operated since 1951, providing locals and visitors with quality beach food at reasonable prices,” Hub Hall said in Monday’s statement.

The eatery is also known for something else among locals: Each year, the opening of Sullivan’s marks the unofficial start of spring for many people who live and work near Castle Island.

Hub Hall organizers said on Instagram that Sullivan’s will give customers “a taste of New England summer all year long.”

“This Boston staple is the place to go for quality seafood,” they wrote.