AS AN OKLAHOMAN who lived in Boston for more than three years and now lives in New York — bastions of left-leaning progressivism — I often find myself conflicted when answering the routine question: “Where are you from?”

And who could blame me? I have spent the lion’s share of the past three years excoriating Oklahoma from afar for struggling to change the name of a school named after Confederate military leader Robert E. Lee; for paying teachers less than 48 other states, until teachers staged walkouts and strikes; and for letting Betty Shelby — the Tulsa police officer who killed Terence Crutcher , an unarmed Black man — walk free.

But today, Oklahoma is doing what many have dreamed of but never thought would be possible, especially in such a deep red state. On Friday, Oklahoma’s Pardon and Parole Board conducted “the largest single-day commutation in the nation’s history,” according to the board’s executive director, Steve Bickley. After a hearing, 527 inmates in state prisons had their sentences shortened.

Why am I surprised? On incarceration, Oklahoma’s version of criminal justice historically has been more criminal than just.

According to the Prison Policy Initiative, a Massachusetts think tank, if Oklahoma was a country, its incarceration rate would top that of every founding NATO country, including the United States. Some Oklahoma criminal justice reform advocates claim that Oklahoma has the highest incarceration rate in the world. 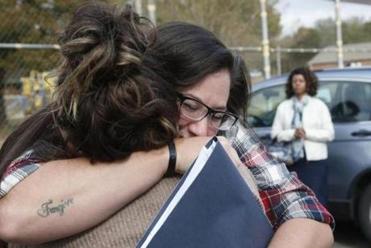 Oklahoma to release nearly 500 prisoners in a single day

Nearly 500 inmates walked out the doors of prisons across Oklahoma on Monday as part of what state officials say is the largest single-day mass commutation in US history.

Oklahoma has racked up even more embarrassing statistics: Over the past 25 years, Oklahoma has topped every other state in the rate at which it sends women to prison. Roughly 151 of every 100,000 Oklahoma women are in prison, which is twice the national average. Why? Susan Sharp, an expert on female incarceration, said, “Women are collateral damage in the war on drugs.”

So, how did a state that has this record on punishing, not rehabilitating, its residents go from incarcerating so many to now breaking records for single-day commutations?

In 2016, my state’s voters started a process to reverse Oklahoma’s cycle of incarceration by voting overwhelmingly to reclassify some drug and property crimes as misdemeanors. Under the ballot initiative called State Question 780, residents voted to recategorize possession of “personal use” amounts of most drugs as misdemeanors instead of felonies. Also, it increased the felony threshold for property crimes from $500 to $1,000.

UPDATE: Oklahoma to release nearly 500 prisoners in a single day

Voters went a step further by voting for State Question 781. This authorized the state government to begin calculating the savings Oklahoma would accrue by reclassifying felony charges as misdemeanors (also taking into account the savings from not imprisoning people) starting on July 31, 2018. The state is required to reallocate those savings into a fund that would be used by county governments to offer substance abuse and mental health services. For many, this signaled a marked change in Oklahoma’s history of excessively incarcerating low-level offenders. By voting convincingly for these measures, Oklahomans outpaced their elected representatives.

To make this happen, an unexpected collection of stakeholders galvanized and organized. Oklahomans for Criminal Justice Reform, led by the former speaker of the Oklahoma House, Republican Kris Steele, boasts an impressive roster of members, including state political leaders, the state’s chapter of the American Civil Liberties Union, religious leaders, law enforcement officials, and even a former chief judge of the 10th US Circuit Court.

Then, in May, Oklahoma’s governor, Kevin Stitt, who was “honored to receive the endorsement of President Trump,” signed legislation that created an expedited commutation process for those serving time for the type of felony sentences that Oklahomans voted to be reclassified as misdemeanors. And though potentially cost prohibitive for defendants, the legislation also provides a simpler path for those with drug possession and property convictions to have their records expunged.

In a state where each of the 77 counties went for Trump in 2016, it shows us that criminal justice reform doesn’t lie strictly in Democratic or Republican hands. It lies in the hands of those who are willing to take an incisive and critical look at how our country classifies crimes and treats those who have committed crimes.

In fact, conservative arguments for criminal justice reform have increased as a result of the work of the Right on Crime initiative, a project of the Texas Public Policy Foundation in partnership with the American Conservative Union. The initiative is established on seven pillars: right-sizing government; fiscal discipline; victim support; personal responsibility; government accountability; family preservation; and free enterprise.

While not necessarily rooted in restorative justice — the bulk of Right on Crime’s language has its roots in typical conservative tropes about lessening the burden on taxpayers and protecting “family values” — these efforts have led conservative political leaders like Governor Stitt to say, “We must invest in diversion and treatment programs. We must release nonviolent offenders from prison who were sentenced on drug charges under old laws.”

If Oklahoma can do it, other states can as well. To be clear, none of this proved simple. All the typical opponents to reforming the criminal justice system still wring their hands and pitch their fits. Sheriffs and district attorneys lodged unoriginal complaints, such as no longer being able to use the threat of harsher felony charges and longer prison sentences to persuade offenders to enter drug treatment programs.

And before I recommend that every state follow Oklahoma’s lead, remember that it didn’t have to be this way. In other words, prevention is better than cure. The state of Oklahoma put itself in the position of having to become its own hero. But Oklahoma voters stood in the gap for the hundreds of low-level, nonviolent offenders. It’s time for more states and their voters to do the same.

I can’t say whether I’ll return to settle in the state that raised me and educated me. But I can say that starting at 11:30 a.m. on Friday, my home-state pride grew as the expedited commutation hearing began.

Caleb Gayle is a writer and an Emerging Voices fellow at Demos. He is a recent graduate of Harvard Business School and the Kennedy School of Government, which he attended as a Paul and Daisy Soros fellow.
Loading comments...
Most Popular in ideas
Real journalists. Real journalism. Subscribe to The Boston Globe today.