When we think about climate change, melting polar ice caps, hurricanes, or forest fires might be the first things that come to mind. If we think a little longer, we might get all the way to renewable energy, greenhouse gas emissions, or coal. Much lower down on the list, if it comes up at all, is average, everyday, run-of-the-mill stuff, including literal stuff: a pair of jeans, a hamburger, Netflix, an air-conditioner.

But those four things, and many others, should be much higher on the list. In fact, almost everything we do, use, and eat in the United States has a lot to do with climate change and the environment, because of the way we use resources, create waste, and emit greenhouse gases without even thinking about it.

That’s why I wanted to write my book: the physical things we interact with every day and lots of our daily activities don’t exist in a vacuum — they’re much more connected to each other, to global climate change, and to each one of us than we think.

The story of climate change — and all of our stuff — is actually a story about everything: nature, science, justice and equality, politics, foreign affairs, business and more. Climate change affects everyone constantly, but until very recently, we’ve barely talked about it at all. Less than a quarter of Americans say they hear about climate change in the media at least once a week; just over a third say they discuss it with their friends and family. Really, we should all be talking about it all the time.

Before I started writing about climate change, I didn’t like reading about it. Stories about climate change filled me with dread and made me feel powerless. The problems seemed too big and too inevitable for me to do anything about, so it felt like it was probably best to look away. Intellectually, I recognized that climate change is the most important issue in the world, and pretending it wasn’t happening wouldn’t make it go away. 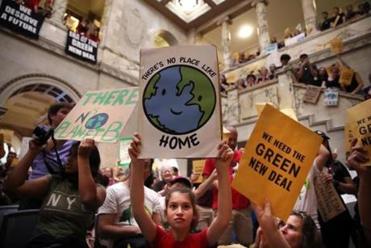 Combating climate change can feel like a daunting task, but we’re not powerless

There are several things we should keep mind as we try to confront the twin problems of climate change and environmental degradation.

Once I became a climate journalist, it became pretty clear to me that there was so much left out of the conversation, including what might make the issues relatable.

I started thinking: How have our habits and our expectations changed over time, maybe generating more waste or encouraging more consumption? What do I notice myself and others doing that seems wasteful but happens without a second thought?

Watching TV and movies has changed dramatically in the last few years; streaming online videos is something that many of us probably take for granted. Maybe we think about the electricity for our laptops, but we probably don’t consider that going online itself uses electricity. In the US, we still get about one-third of our electricity from coal, so streaming your online video may be coal-powered, contributing to greenhouse gas emissions and the creation of coal ash, one of the largest industrial solid-waste streams in the country.

RELATED | At the edge of the warming world: Climate change on Cape Cod

What about cotton? Sometimes, we hear about the problems caused by water use for food production, but we don’t always hear those same things about cotton. Cotton has to be grown somewhere, and depending on where, as many as 2,000 gallons of water could have been used to grow one kilogram of it, and up to 2,900 gallons more could have been used to make it into a pair of blue jeans.

Cutting red meat out of your diet is often cited as an effective way to reduce your impact. But there are problems that agriculture poses beyond just greenhouse gas emissions: in the US, the majority of cows mostly eat feed derived from corn and soybeans, and the way we grow those crops also causes massive amounts of water pollution — in rivers, lakes, the Gulf of Mexico, and rural drinking supplies.

For the most part, these aren’t the kinds of environmental issues we hear about, but they can help us understand the broader scope of the problem. As I began to learn more about the many aspects of climate change, I started to feel less anxious and scared. I felt that I understood what was happening in the world, that I could evaluate what politicians and scientists and business leaders were saying, and that I felt like a more informed and more responsible citizen.

Unfortunately, knowledge doesn’t necessarily change our very real feelings of powerlessness. While we know what needs to happen to mitigate the effects of climate change, actually getting there is really hard, and a certain amount of warming and change is unavoidable at this point. Few people have offered understandable solutions, and we aren’t told very much about either these solutions’ effectiveness or the actual effort or expense involved in making them happen.

Instead, we hear a lot about smaller fixes that play to our individual desire to have an impact, leaving larger systemic problems unaddressed. Most of us know that plastic bottles are wasteful and are told to use reusable ones. Then we hear that all of our electricity needs to come from renewable sources within the next decade, requiring a major retooling of the economy, a transformation of the electrical grid, and developments in battery technology. Somehow, it seems like these two options are given the same amount of consideration and attention. (Actually, plastic bottles probably get way more attention.) We focus on the little things in the hope that they matter, so we can feel like we at least did something when the apocalypse comes.

Maybe you don’t think it’s helpful to hear how big the problem is and how we’re making it worse. I agree: the size of the problem and the narrative of personal responsibility is destructive. It makes us feel guilty about everything we do, and seems to let those who are truly responsible off the hook. It should be up to companies to use less water to make their jeans or prevent rural drinking water pollution, not left to the customer to figure out which brand is a little better. We don’t have to buy certain products if companies are unwilling to at least tell us how they’re made.

RELATED: The climate strikers are waging the most important fight in human history — can they win?

As I went through the five stages of environmental grief — denial, anger, trying to use less plastic, depression, determination — while writing this book, I came to realize in a new and powerful way that, in the end, we’re not powerless. In this country, we can vote.

In 1969, an explosion at an offshore rig sent 3 million gallons of oil into the ocean around Santa Barbara, Calif., and later that year, pollution in the Cuyahoga River in Cleveland caught fire for the thirteenth time. The next year, activists and politicians organized the first Earth Day, which brought 20 million Americans to the streets. In the 1970 election, some of those same activists targeted twelve members of Congress with the worst environmental voting records, nicknaming them the “Dirty Dozen.” Seven of the twelve lost, sending a message to all the other lawmakers and leading to the expansion of the Clean Air Act and the passage of the Clean Water Act. And we are seeing it again: several newly elected members of the House of Representatives, mainly women of color, have changed the conversation about climate action, making a “Green New Deal” a priority, and getting many Democratic presidential candidates to endorse it.

These representatives might not be able to change everything right away – we might not change the entire electrical grid in one session of Congress – but that’s no reason not to start, because no matter what happens, we are going to have to continue to fight to make a difference. The changes we need are dramatic, and a lot of special interests are aligned against progress. As citizens, we have a responsibility to put environmentally progressive leaders in office. But it can’t end there. If we want to have clean electricity, and to grow food, manufacture goods, and get around responsibly, we have to understand what it will take to get there and ensure it actually happens. It’s up to us to create a country that takes seriously its obligations to the planet, to each other, and to the people who will be born into a different, warmer world.

Essentially, what I’m describing is hard work with possibly limited success for the rest of your life. But we have to do it, and at least we will have the satisfaction of knowing we made things better. And we have to start now.

Tatiana Schlossberg is a journalist who writes about climate change and the environment. This article is adapted from Schlossberg’s recent book “Inconspicuous Consumption: The Environmental Impact You Don’t Know You Have.”
Loading comments...
Most Popular in ideas
Real journalists. Real journalism. Subscribe to The Boston Globe today.