THE MOST STRIKING feature of the youth climate strikes that drew enormous crowds all over the world Friday was their optimism in the face of calamity.

Here in Boston, as thousands descended on City Hall Plaza, protesters hoisted red and blue signs declaring, “There is Hope.”

And the teenagers on stage led the assembled in a high-energy, roving dance party — high school kids riding on their friends’ shoulders and singing along to the music: “We are young . . . so let’s set this world on fire.”

This was a joyous dissent — or at least a dissent leavened by joy.

But all the song and color could not obscure the depth of the problem this generation of activists is confronting. 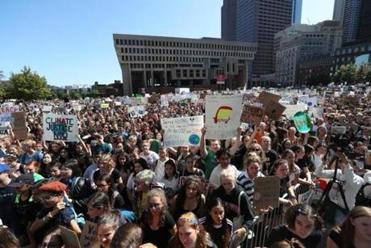 High school students have been organizing the strike for the past few months as part of a worldwide series of strikes ahead of a United Nations climate summit in New York City.

The world’s leading climate scientists have warned that we have only 11 years to roughly halve our carbon dioxide emissions — or significantly increase the risk of floods, extreme heat, and crippling poverty for hundreds of millions of people. No small task in the age of Trump and Bolsonaro.

It’s not just the climate fight that looks so daunting. The limits on the student-led March for Our Lives movement, which grew out of the school shooting in Parkland, Fla., are etched into the Constitution — the Second Amendment all but guaranteeing we’ll have hundreds of millions of guns in our midst for the foreseeable future.

And Black Lives Matter, as its name suggests, is asking for something harder to pin down than the signature legislation of the civil rights movement.

Where previous generations of activists asked a country to live up to its ideals, this one is demanding something more profound: victory over some of our most basic human flaws.

We’re being asked to cast aside a tribalism that runs deeper than the law, an ancient taste for violence, and an inability to wrap our heads around threats — like climate change — that feel distant.

There is a certain fatalism, then, that eats at these movements.

“Climate grief” might sound like a woke absurdity. But it’s easy to get to a dark place if you spend your time contemplating the erasure of the Great Barrier Reef and the murderous destruction of Hurricane Dorian.

That, of course, is what activists spend their time doing. And it’s becoming harder for the rest of us to avoid the same — a wave of despair threatening to wash away the climate movement just as it’s getting its footing.

The strikers know this. Ebullience is their counter-measure. Hope one of their essential strategies. The question facing the movement and maybe the rest of the world: Is hope hopeless — or is it our best shot at redemption?

I MET SAYA Ameli Hajebi on a sunny afternoon a few days before the strike.

She’s a 17-year-old senior at Brookline High and she has plenty of schoolwork to do.

But in the past few weeks, she told me, she’d devoted countless hours to preparing for the protest: printing t-shirts, stenciling banners, and spreading the word with chalk illustrations on the sidewalks outside subway stations in Jamaica Plain.

Hajebi is heavily involved in the Boston branch of the Sunrise Movement, a relatively new — and surprisingly influential — group of climate activists in their teens and twenties.

The activists were forceful — demanding that Democrats embrace an obscure, and wildly ambitious, proposal known as the “Green New Deal” that called for nothing less than a fundamental re-ordering of the American economy and a carbon-neutral future.

But there was a lightness about the protest, too.

These were not the dour environmentalists of generations past, prattling on about polar bears drifting away on the ice.

Sunrise logos shone from the T-shirts. And much of the protest — like all Sunrise protests — was conducted in song.

Hajebi spent her earliest years in Tehran, where the sky was always dark with pollution. And she traces her environmental awakening to the day “my mother decided to prove to my brother and I that the sky is actually blue.”

They gathered a couple of water bottles and climbed a dusty mount, and “for the first time, on the summit of this hill, we were able to look up and see the actual sky.”

After she arrived in the United States, Hajebi tried volunteering with various environmental advocacy groups, but she always felt like the “odd one out” — too young or too urgent. Then she found Sunrise and it all seemed different.

She was among peers. And there was an infectious, grab-it-by-the-collar energy to it all.

Todd Gitlin, a professor at the Columbia Journalism School and leading authority on social movements, said you have to understand the importance of generational experience to grasp the Sunrise phenomenon.

The young people leading the new climate fight, he said, are not old enough to remember George H.W. Bush mocking Al Gore as “ozone man” during the 1992 election.

They came to political consciousness amid real concern about a warming planet. Their experience is Barack Obama joining the Paris climate accord and Donald Trump ostentatiously pulling out; it’s fires in the Amazon and Greta Thunberg, the 16-year-old Swedish climate activist, sailing across the Atlantic to scold Congress on its inaction.

“You have new facts on the ground — global facts, what’s happening to the earth, but also political facts, about what’s now possible, what’s now imaginable,” he said. “For activists, that’s very exciting. It’s both an imperative and an incitement.”

Rory McVeigh, director of the Center for the Study of Social Movements at the University of Notre Dame, agreed. But he said the movement needs something else to endure. “Small victories,” he said, “are really important to keep burnout from setting in.”

Over the last couple of years, this generation of activists has managed to rack up some impressive small wins.

After the shooting at Marjorie Stoneman Douglas High School, protesters helped push through a Florida measure allowing law enforcement, with a judge’s approval, to bar a person deemed dangerous from owning guns for a year. Several states followed with “red flag” laws of their own — bringing the total to 17 states, now, and the District of Columbia.

The Black Lives Matter protesters can claim a hand in the criminal justice reform bill that made its way through Congress last year. And climate activists have seen movement on the Green New Deal.

In the months that followed, the Green New Deal — derided as a socialist fantasy not so long ago — had the support of 16 Democratic candidates for president, including frontrunner Joe Biden.

Hope, it seemed, was winning.

IT’S UNCLEAR, THOUGH, if it can finish the job.

This generation of activists has done an impressive job of winning over the left wing of the Democratic Party — and making inroads with some moderates.

But it’s hard to imagine them gaining much Republican support in a hyper-partisan Washington.

Here again, Millennial and Generation Z protesters find themselves on different ground than their forebears. “The civil rights movement,” as University of New Hampshire historian Jason Sokol pointed out in a recent interview, “didn’t associate itself with either party — at least initially.”

And even as the movement became increasingly associated with Democrats over the course of the 1960s, large numbers of Republican lawmakers voted in favor of its signature legislation.

Bipartisanship is not entirely dead; the criminal justice reform that made it through Congress last year had strong Republican support.

But it would take a sweeping Democratic victory in the 2020 election to make something as transformative as the Green New Deal even remotely plausible. And even then, skepticism in the Democratic Party could sink the measure; as recently as February, Pelosi was referring dismissively to the idea as the “Green Dream.”

Ultimately, it may take generational change — a different sense of the necessary and the possible — to produce a largescale response to climate change and the other pressing problems of the moment.

Of course, it may be too late by then.

But Hajebi, for one, says she’ll keep up the fight.

“The way I get over the fear I have for the future,” she says, “the way that I balance that out in my life, is through activism. I feel like, if I’m putting my best behind this work, there’s no way that we can go wrong.”