It was the commercial seemingly seen ’round the world this week: A Peloton ad in which a man gives his wife one of the brand’s exercise bikes for Christmas — which she uses constantly, showing her gratitude a year later with a spliced-together home movie of cellphone video clips of her on the machine.

At one point, the instructor on the screen can be heard saying, “Let’s go, Grace in Boston,” to which the woman exclaims, “She just said my name!”

Reaction to the commercial was at once widespread and visceral, as some criticized the ad for being sexist and demeaning, as the husband gives his already-fit partner a means to lose more weight.

Nothing says ?maybe you should lose a few pounds? like gifting your already rail thin life partner a Peloton pic.twitter.com/E2M9gFdD5A

this year i?m thankful for the inspiring peloton commercial of the apprehensive 105 lb woman whose life was forever changed by her new exercise bike bc she was able to get to her goal weight of 103 lbs #livelaughlove #blessed #namaste

The online outrage Tuesday also drove down Peloton shares as much as 10 percent, and prompted calls for the company to pull the commercial, according to Bloomberg News. The company started Tuesday at $35.70 and ended the day at $33.48, according to MarketWatch. (The company’s stock as of 12:30 p.m. Wednesday afternoon had fallen to $32.16.)

However, Peloton officials seemed to be standing by the controversial commercial, telling the Globe in an e-mail that they were “disappointed in how some have misinterpreted this commercial.” 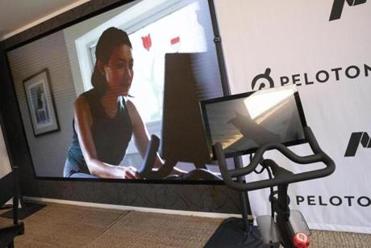 On its surface, the commercial seems innocuous enough. However, the holiday-themed ad featuring “Grace in Boston” has sparked a slew of horrified and disgusted reactions.

“We constantly hear from our members how their lives have been meaningfully and positively impacted after purchasing or being gifted a Peloton Bike or Tread, often in ways that surprise them,” a statement from the company said.

“Our holiday spot was created to celebrate that fitness and wellness journey. While we’re disappointed in how some have misinterpreted this commercial, we are encouraged by — and grateful for — the outpouring of support we’ve received from those who understand what we were trying to communicate.”

A representative did not respond to questions as to why the ad was specifically set in Boston. (Peloton does have several showrooms in Eastern Massachusetts, including at the Prudential Center, and recently promoted its product at a Patriots game at Gillette Stadium.)

In one, a woman named Heather Haworth posted a lengthy Facebook entry defending the ad: “When I see that ad, I see a woman who is lovingly gifted a Peloton bike because it is something just for her.”

Haworth continued that the ad resonated with her, a working mom who tries to juggle all aspects of her life, because she sees “a professional woman with little time for herself who becomes surprised that she can find a small amount of time for herself to work out.”

At the end of her post, Haworth writes: “I see a woman who, at the end of the year, is surprised and thankful for the gift that is Peloton, the community and the accomplishment that she achieved to be **healthier** both physically and mentally. I did not ever see an already slender woman who wanted to lose weight. I love this ad, because, in it, I see me. #iamthepelotonwoman”

Haworth’s Facebook account appears to be private; she did not respond to a Globe inquiry early Wednesday afternoon.

Peloton also shared three e-mails to the press account defending the ad. In one, a woman named Melissa said that a Peloton bike got her sister-in-law through a rough bout of chemotherapy after being diagnosed with breast cancer, adding, “I hope when your company has future ads, they will consider showing this side of your product.”

Another cheery e-mail from a woman named Ally said she perceived the ad as “a thoughtful commercial,” noting, “the first time I saw it I thought, ‘that was a sweetly portrayed ad.’ ”

“I’m sorry for any and all of the negativity that has been spread because of this holiday marketing ad. I’m sure Peloton has an awesome, hard working, and skilled team of marketers — I hope they keep their heads up!”

In the third e-mail, a man named Richard described people who were “hating the ad” as “ridiculous.”

Meanwhile, other Peloton customers are also making their opinions known on social media. Jessica Tysor used many of Haworth’s words in a post she uploaded, adding, “I’m so sick and tired of everyone being so offended by everything these days.”

In an e-mail to the Globe, Tysor, a mom who currently lives on the Oregon coast, said that the ad and the controversy around it has led to much discussion in her Peloton moms’ Facebook group.

“Honestly, the ad resonated so much with me and her post reflected so much of my own journey; especially the guilt around prioritizing my time over my [family’s],” Tysor told the Globe, calling her Peloton purchase one of the best ever made, adding that her husband and oldest child also use the bike.

Mekanism, an ad agency that touts Peloton as a client on its website, did not respond to a Globe e-mail for comment. A representative who eventually picked up the phone at the agency’s New York office said the firm was not taking calls in regards to the ad and advised a reporter to try back in a few days. Further questions were met with a decline to comment.

The bikes themselves aren’t cheap: They start at $2,245 — before the $39 monthly membership fee to stream the service’s virtual classes.

• Advice: Can I give my wife an exercise bike? And other gift etiquette guidelines

• Nestor Ramos: If Peloton is canceled, here are some gifts that won’t get you in trouble on Twitter

• Peloton ‘husband’ says he worries about repercussions on his career