A new Star Market will open Friday in the new Hub on Causeway complex at TD Garden.

The two-story market, which is part of the $1.1 billion Hub on Causeway development, sits on the north side of the new “Champion’s Row” entryway to TD Garden on Causeway Street. A street-level space will sell grab-and-go items and have a Starbucks inside that opens at 5 a.m. to serve commuters entering and exiting North Station, said John Scuccimarra, Star Market’s general manager. An escalator will take customers underground for their more comprehensive shopping needs.

Store director Bob Kelly said he’s spent the past few months talking with area residents to ensure the store will serve them well. “We spent a lot of time trying to marry the assortment to the community,” he said.

He said the market will feature a Pizzeria Regina downstairs for quick slices, a large selection of beer and wine, and a variety of organic and ethnic foods in the aisles. For seniors, the store will offer discounts on the first Saturday of the month and a drop-off shuttle once a week. Time-crunched shoppers can use Instacart for grocery deliveries and in-store pickups.

Scuccimarra said it’s tricky to plan every detail of a supermarket in the center of a major transportation and entertainment hub whose foot traffic ebbs and wanes with the arrival of commuters and fans, so adjustments will be made over time. 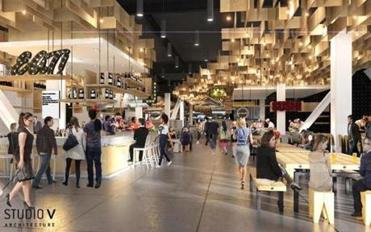 A new food hall is coming to Boston this winter, and already the lineup is looking delicious.

“But that’s part of the fun of it,” he said, promising, “We’ll be able to serve the masses.”

This story has been updated to correct information about the size and location of the store.