Many people count on getting a federal tax refund, treating it like an annual bonus they can use to pay off bills, pay down loans, or put toward a vacation.

But as this year’s tax season blooms, some early filers are instead receiving an unpleasant surprise: Their refund is either much smaller than they anticipated, or for the first time they actually owe money to the US Treasury. It’s resulting in anger, confusion, and more than a little misinformation, which, of course, has spread across social media like wildfire.

You can blame the mess on the big tax bill pushed through Congress and signed by President Trump. The Tax Cuts and Jobs Act of 2017 was touted as a major tax reform package that would put more money in pockets of millions of middle-class Americans.

But as a result of a series of complications, including the way employers implemented the law, the Internal Revenue Service says the average 2018 refund is more than 8 percent lower than last year — $1,865 compared with $2,035.

The tax bill actually did put more money in the pockets of many Americans. The problem is, a lot of them didn’t notice. That’s because the new law lowered tax rates for most people, so employers adjusted their workers’ withholding amounts downward. That meant they took home more money on a weekly or biweekly basis but had less held aside for taxes. In some cases, the added paycheck amount was too meager to notice. For others, higher health insurance premiums or 401(k) deductions swallowed up the tax savings altogether. 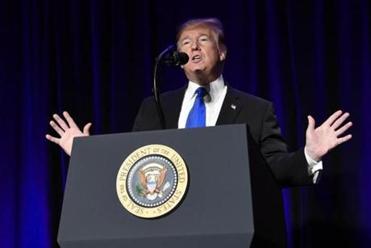 Congress plans to vote Thursday on a spending bill to avert another government shutdown while giving President Trump only part of the money he seeks to build a border wall.

Morgan Crooks, a middle school teacher who lives in Woburn, said that he and his wife have not depended on a tax refund to balance their household finances. Still, he was caught off guard to discover this year’s refund was down by more than 30 percent.

“I know a lot of people kind of budget around the refund,” he said. “I can imagine this just [having] a devastating effect.”

“Just finished our taxes, we owe over $900,” read one tweet that was posted Sunday. “We have never owed before. Our mortgage is 15k a year and we have 5 kids in the home still. So glad we can pay for the rich to get richer.”

Another Twitter user wrote, “How can I, a middle-class American, have the same job w/ the same income & the same deductions receive LESS from the government for this year’s taxes?!?! Oh, that’s right, the #TaxReform was only for the rich.”

The uproar may be causing some taxpayers to delay filing, fearing that they will owe money. According to IRS data, about 2 million fewer tax returns have been received by early February compared with last year.

“A lot of people use a large tax refund as a bonus,” said William Driscoll, a financial planner based in Plymouth. “But really, it’s an interest-free loan to the government.”

Driscoll said the confusion largely stems from unfamiliarity with the hopelessly complicated federal tax code, which has gone mostly unchanged since it received a major overhaul in 1986.

“We’re still to a large extent operating a little bit blind,” he said of the changes built into the Republicans’ tax cut.

The act reduced tax rates for most individuals and businesses and offered other tax breaks — including for the self-employed — but there were other changes that the federal government says could result in some people paying more.

A key goal of the overhaul was to simplify the existing tax regulations. To help achieve that, the standard deduction — the amount of income exempt from taxes — was increased. The threshold for itemizing rose from $6,350 to $12,000 for individuals and from $12,700 to $24,000 for those filing jointly.

Perhaps most important for residents of high-cost states such as Massachusetts, the new law includes some key limits on deductions. Mortgage interest can now be deducted on newer home loans of up to $750,000, instead of the previous $1 million. The deduction for local taxes — including property taxes — was capped at $10,000. There was no limit before.

Peter Ireland, an economics professor at Boston College, said those limits could translate into a tax hike for some filers.

But the refund shock may not be limited to middle class and more affluent taxpayers.

Brian Robinson, operations manager for the Boston Tax Help Coalition — which prepares taxes for people who qualify for the earned income tax credit — said many of its clients have been “disappointed” with their refunds so far. Last year, the coalition filed close to 13,000 tax returns and helped secure $24 million in refunds, but Robinson could not yet provide comparison numbers for this year.

Crooks, the teacher, said he wishes the government had been more transparent about the effects of the changes to the tax code and took more steps to educate people about what’s different this year. “They probably should have messaged us a little better,” he said.

Max Reyes can be reached at max.reyes@globe.com.
Loading comments...
Most Popular in business
Real journalists. Real journalism. Subscribe to The Boston Globe today.