A Brandeis University employee nearly ousted “Jeopardy!” champ James Holzhauer, coming within $18 of his competitor — and is thought to have tallied the highest dollar amount of any non-winner on the show with his game total of $53,999.

Adam Levin, a 46-year-old Ashland resident who serves as a spokesman for Brandeis sports, competed against Holzhauer in an episode that was taped in late February but aired Monday night.

In recent weeks, Holzhauer, a professional gambler from Las Vegas, has grabbed headlines after his hot streak on the game show, earning a reputation for not only his wild gamble-it-all bets but also for making sure his totals match up with adorable dates, like his daughter’s birthday or his anniversary.

By the time Levin — who is also a Brandeis graduate — got to the podium on Wednesday, Feb. 27, Holzhauer had already won 17 consecutive games and racked up $1.275 million in total earnings.

But Levin had a slight edge that day: Because the show tapes five episodes in one day, and selects 12 contestants to come to the set for 10 spots, Levin was one of two extra contestants called in on Tuesday, Feb. 26. He ultimately wasn’t selected that day, meaning he was able to watch Holzhauer play five games before facing him in competition. 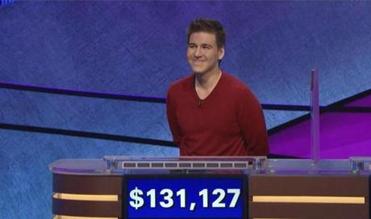 Here’s how long it could take for James Holzhauer to surpass Ken Jennings on ‘Jeopardy!’

With a 97 percent response accuracy rate, a single-game win record of $131,127, and surpassing the $1 million threshold after just 14 games, Holzhauer has grabbed a lot of attention.

“I was able to note what he was doing and see how he was playing differently than ever seen before, and I was able to process that,” he said.

When Levin arrived to play in the first taping the next day, he was prepared.

“I was lucky to beat him on the buzzer a few times, and lucky especially to get a late Daily Double and keep the game close at the very end and make a big wager on Final Jeopardy,” he said, adding that a fan site, thejeopardyfan.com, noted that his total of $53,999 is the “highest-ever regular-play non-winning score in the history of the show.” (“Jeopardy!” officials could not immediately confirm that to the Globe Monday night.)

Levin said he didn’t know about Holzhauer’s winning streak until he arrived that first day, Tuesday, and went through a conversation with other contestants and a “Jeopardy!” staffer.

“She [the staffer] asked James how many games he had won, and he said 12. Then she asked, ‘James, how much did you win?’ and he said ‘$850-some thousand,’ and I think that’s when the jaws dropped. Those are numbers I had not heard of before, outside Ken Jennings,” Levin said. (Jennings currently holds the winnings record for “Jeopardy!” at $2,520,700 over 74 consecutive games.)

So how did Levin feel about facing such a formidable opponent?

“I guess I was excited,” he said. “It gave me a couple of thoughts: I know I’m going to be good and have fun out there no matter what. And I guess if I win, I’m going to beat this guy who’s been winning a lot. And if I lose, then I will have lost to one of the best people to have played the game, so there’s no shame in that either.”

After watching Holzhauer play, Levin said he tweaked his own strategy a bit. (Holzhauer excels, in part, by beginning with the highest-value clues, hoping to quickly build winnings, and land on the one ‘‘Daily Double’’ in the first round. When he does, he usually bets everything.)

“James is a super aggressive bettor,” he said. “I don’t know if my natural instinct is to go all in on Double Jeopardy, but that’s the way I was going to win. In terms of picking and bouncing around to find Daily Doubles, I suppose I was trying to do that, but maybe I was following the lead a bit of what was happening of James’s strategy of bouncing around the board a bit. Watching him for five games, I knew the normal way of starting at the top and going to the bottom and one category at a time would not have worked.”

And even though he lost by such a slight amount, Levin didn’t seem too sore about it.

“I work with student-athletes all the time and I see them win games and lose games and whichever it is, they are putting it all out there all the time,” he said. “Sometimes they win and sometimes they lose. As long as they put everything out there and gave it their best effort, they come away happy, and that’s how I felt.

“I did everything I could possibly do and the best I could, and I was a few dollars short, but I wouldn’t trade it,” he continued. “I had a huge smile on my face for as much of the time I could, because I was living the dream.”

When asked if he wishes he had been selected for a game spot against anyone other than Holzhauer, Levin paused.

“I mean — yeah, of course that crosses your mind,” he said. “I wish I had won. . . But I don’t have any regrets or anything like that. It’s just the way the dice landed for me.”

The game ended up playing out suspensefully until the very end. Going into Final Jeopardy, Holzhauer had $33,517, Levin had $27,000, and the third contestant, Jasmine Leonas, had $7,800.

Leonas’s answer was read first — and was wrong, though she wagered nothing. Levin, meanwhile, bet everything except for $1 — because “that’s what James is going to do, and there’s no point in coming up a little bit short” — and ended up answering correctly, earning him $53,999.

“I felt confident but not certain,” Levin said of his answer, which he had to piece together based on the clue. “When Alex said ‘That’s correct,’ I had a big smile on my face. And then all I could do was wait to see whether James got it right.”

“I assumed if he got it right, he would have the right wager, and that’s what happened,” Levin said, although he has no regrets: “I did everything I could.”

Even though Levin came away with such a high number, he still only received the $2,000 awarded to the runner-up.