We have a hard time letting go of things we love.

Be it a treasured trinket, an old love letter, or maybe a dead pet’s ashes in a shoebox under the bed — although hopefully not that. But when it comes to television characters, we really can’t let go.

When they’re not getting rebooted on the small screen, à la “Will & Grace,” “Roseanne,” or “Gilmore Girls,” they’re turning up at the cinema. This is when we hold our breath. Legacy and love are at stake.

Was it a good idea to make a second “Sex and the City” movie, even with the added bonus of Liza Minnelli singing “Single Ladies”? Absolutely not. Did the actors from “Star Trek,” plus William Shatner’s toupee, need to come back to save the whales 20 years after the original series debuted? Nope. Did we need an “Entourage” movie? That’s a hard no. We didn’t need “Entourage” in any form.

I had little emotional investment in those films, but the “Downton Abbey” movie is a different kettle of fish and chips. 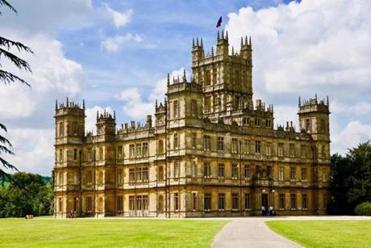 A visit to Highclere Castle and the wonderful world of Downton

Christopher Muther loves “Downton Abbey” so he, too, wanted to be surrounded by ancient tapestries and tufted velvet sofas. This was his chance — and he almost blew it.

I invested myself deeply in 52 episodes of the upstairs-downstairs drama of an English family trying to hang on to a monolithic castle and its evaporating aristocratic lifestyle. The series was a gift that we delicately and eagerly opened layer after layer, year after year, until we were emotionally satisfied and grateful with what series creator Julian Fellowes and international treasure Maggie Smith had bequeathed us.

I was terrified to find out whether the “Downton” movie would be the gift that kept on giving, or whether I would need to hang on to the emotional receipt and ask for my cherished memories back. I love all things “Downton,” and I didn’t want those memories sullied.

Guess who cried with joy when Matthew Crawley (Dan Stevens) proposed to Lady Mary Crawley (Michelle Dockery)? This guy, that’s who. Who dropped his Doritos with quaking hands and a quivering lip when Lady Edith Crawley (Laura Carmichael) was left at the altar? Yes, that was me as well. I’ve traveled to the locations in England where the show was filmed, and I have come up with excuses to interview the actors and the show’s costume designer. The technical term for this type of behavior is shameless.

The news of a “Downton Abbey” movie stirred equal parts terror and elation in my chitterlings. Everyone appeared destined to live happily ever after when the series wrapped. I did not want to see Mr. Bates (Brendan Coyle) tossed back in prison or listen to patriarch Robert Crawley (Hugh Bonneville) sputter more outdated guff when Mary and Tom Branson (Allen Leech) attempt to save the estate.

“Please!” I thought. “Leave them be.” If we’ve learned anything from years of television and movies, it’s that exhuming the dead can only lead to zombies, or, even worse, an “Entourage” movie.

Even with my deep trepidation, there was no question that I would see the movie. I managed to squeeze myself into an early screening (again, shameless), and bit my lip as John Lunn’s now-iconic “Downton” theme began.

Here’s the good news about the movie. The legacy remains intact. Even better, Paul Giamatti does not make a guest appearance. With few exceptions, there is nothing too damning or outrageous that happens to our beloved characters. I’m not going to reveal those exceptions because I operate under a strict no-spoilers policy. The film is primarily a self-contained caper surrounding a visit from King George V and Queen Mary. But that visit is a thin excuse to launch the action, both among the Crawleys and the servants.

Truth be told, I could have sat for two hours and watched Smith’s Violet Crawley volley pointed witticisms while wagging her chin at Isobel Crawley (Penelope Wilton), who is now known as Lady Merton. The chemistry between the two actresses is as dynamic as it was during the series.

The movie feels like one of the cherished Christmas episodes, but longer. It’s a tidy package with a few character development tendrils unfurling with the promise of new stories, new romance, and new changes.

But wait. Does this mean a second “Downton” movie is on the horizon?

Fellowes, “Downton” producer Gareth Neame, and three actors from the show/movie were at the screening I attended. After the movie there was a Q & A session where the question of a sequel was asked. Fellowes shrugged and grinned, Neame said it would depend on how this movie did at the box office, and Phyllis Logan (Mrs. Hughes) and Lesley Nicol (Mrs. Patmore) both strongly indicated that they were onboard for a second film.

Immediately, I began to fret again about my “Downton” family and said a silent prayer. “Please, no matter how many of these movies you make, just let Edith be happy and keep the Dowager Countess alive as long as possible.”