Either they don’t know, don’t show, or don’t care about what’s going on in the hood.

I was not yet 12 years old when Doughboy (Ice Cube) said those lines in the final scene of “Boyz n the Hood.” But I was old enough to know the weight of his words.

Nine months later, when Los Angeles officers were acquitted for the brutal beating of Rodney King and riots broke out, Singleton’s message resonated in ways that can never be dismissed as just entertainment.

“Boyz n the Hood” captured young black life in South Central Los Angeles and neighborhoods like it across the country. Whereas headlines do their best to demonize black people and justify their criminalization, Singleton showed our humanity. 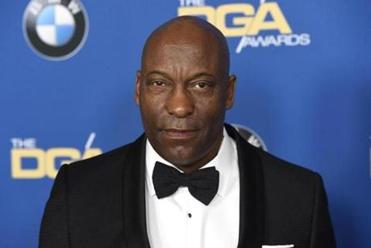 His powerful debut film, “Boyz N the Hood,” earned him an Oscar nomination for best director, the first for an African-American.

He died Monday after his family took him off life support, having had a stroke earlier this month. He was only 51. But his legacy forever lives through his art.

Singleton knew what was going on in the hood. He grew up in those communities. Every film showed us the bittersweet beauty of black life and the freedom of imperfection. Singleton understood the power of representation and the justice served in nuance. He cared.

As the first black filmmaker nominated for best director at the Oscars (for “Boyz n the Hood” in 1992), he launched the acting careers of Tupac, Tyrese, Taraji P. Henson, and Ice Cube. He gave us Morris Chestnut and Cuba Gooding Jr. And though Laurence Fishburne’s resume was already growing, Singleton wrote him as a cool sage — something that has become signature to his style.

He wrote roles that allowed Regina King and Janet Jackson to be more than a child actress and a pop singer, respectively. He saw them as stars. He knew rappers and singers were natural storytellers and helped them cross over into film.

Singleton had a hand in dozens of projects, the latest of which was “Snowfall,” an FX series chronicling the government’s role in the rise of crack in 1980s Los Angeles.

But his first three films laid the foundation for a lifetime on screen. By the time he was 27 years old, Singleton wrote and directed “Boyz n the Hood,” “Poetic Justice,” and “Higher Learning.” I wasn’t even 16 by the time I saw them all.

Decades later, the films still hold up as a slice of black American life. It was always by design. Singleton knew representation mattered.

“Over the years, people of various cultures, their voices were excluded from film and media,” he told i-D magazine in 2016. “It was pretty much a white-dominated medium, so how is it when you don’t see yourself onscreen? You feel invisible, you don’t feel validated. The reason we have film and TV is the same reason cavemen drew on walls — to show who I am, I’m significant, I have a soul, I existed at a certain time. It’s the same reason people make film — they want to get their stories onscreen, they want to validate their own existence.”

Singleton showed us the danger black boys and men face in the country’s most neglected, oppressed, impoverished, and violent neighborhoods with “Boyz n the Hood.” He also showed us their spirit, brotherhood, and love.

His 1993 film “Poetic Justice” centered on the women in the community and what it means to love the men in the hood. Poet and hairdresser Justice (Janet Jackson) sees her boyfriend murdered. We see the isolating effects of Justice’s grief and her fear to love again. We see romance grow with postal worker Lucky (Tupac). We see them as hard and soft, gritty and graceful. The duality is real.

Singleton’s movies represented the depth of black love and also the tortured timelessness of black struggle.

We watched Justice witness the murder of her boyfriend more than 25 years ago. In our real world, Diamond Reynolds saw her boyfriend killed by a Minnesota police officer in 2016. She streamed it on Facebook Live. She fought for his humanity in his death. The world grieved when Nipsey Hussle was murdered last month. We watched his funeral at the Staples Center on TV and computer screens. But it’s his girlfriend Lauren London who is living the nightmare of having the love of your life torn from you.

“Higher Learning” came out in 1995, long before the shootings at Virginia Tech and Parkland, and just four years before Columbine. It was more than 20 years before Tarana Burke started #MeToo. It was decades before white nationalists descended upon Charlottesville to rally for Robert E. Lee and white supremacy. It was 21 years before Colin Kaepernick first took the knee in protest of police brutality and oppression.

Yet “Higher Learning” foretold these moments. The film took place on the fictitious campus of Columbus University, where a freshman class gets a real world dose of racism, sexism, privilege, anti-queer attitudes, and classism.

Throughout the film, you see how the police shut down the black parties and black protests, ask the black students for their IDs, and harass them even when they need help.

“Higher Learning” shows white students flip a car, have a wild frat party, commit a rape, and toss around homophobic and racist slurs without consequence. Singleton’s film captured the struggle of the past, present, and future.

In 2017, neo-Nazis terrorized Charlottesville. Heather Heyer was murdered protesting their hate. President Trump still claims there were “very fine people on both sides.”

Philadelphia Eagles fans rioted after the 2018 Super Bowl win. It was called a celebration.

“A black man, no matter what his class status, would still have no rights that a white man by law would be bound to respect,” he writes. “The result would be the same no matter what the law of the land states because it was not written by and for the benefit of African-Americans. The credo ‘liberty and justice for all’ is a falsehood that has been widely ignored and needs to be addressed.”

The closing scene of “Higher Learning” is a shot of the American flag as the national anthem plays. The word “unlearn” is typed across it. Unlearn.

Singleton used movies to unteach the stereotypes that denigrate blackness. He wrote characters with layers that showed their imperfections without robbing them of their humanity. We don’t have to be angels to have soul, to be written with love and given dignity, to deserve to exist.

With every film and show, he never forgot the black and the blue truth of the beauty of boys and girls in the hood.