Here’s what I mean: While George Lucas embraced the digital revolution for the second “Star Wars” trilogy — and even went back to the first three movies to “improve” their effects on video — the new film consciously embraces the funky, handmade garage aesthetic of 1977’s “Star Wars.”

Director J.J. Abrams has cast three key actors from those original films, knowing that their weathered faces say as much about where we ourselves have been in the intervening decades. He lets John Williams lovingly repurpose his classic theme music, uses old-fashioned screen wipes to transition from scene to scene, brings back co-scripter Lawrence Kasdan and the onscreen battles between TIE fighter and X-wing. We even get a trip on the Millennium Falcon to a cantina. Through hyperspace.

The effect is like pulling a cherished old record album from the shelf and cueing up the needle. “Star Wars: The Force Awakens” is analog. You can touch it. It feels good.

Don’t tell anyone, but the movie’s more of a remake than a reboot. That’s what keeps it from being a great “Star Wars” movie, as opposed to one that just satisfies every nostalgic itch you need scratched. There’s a hero who starts as a nobody from a nothing planet, only he’s not named Luke Skywalker and he’s not a he: She’s Rey (Daisy Ridley), abandoned as a child on a desert junkyard called Jakku. 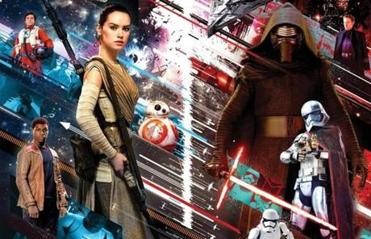 Interviews with actors, character bios, interesting facts about the movie, and a lightsaber explained.

There’s an adorable robot named BB-8 who speaks in digital-boppedy-boo and who carries a hologram map that must get to the rebel forces. There’s a bigger, badder Death Star, and there’s even a new Darth Vader on the block: Kylo Ren, who is played, quite effectively, by Adam Driver (“Girls”) with the latest model evil-genius headgear. When he plays a few scenes with the helmet off, you remember what a hopeless actor Hayden Christensen was in the last two films.

“The Force Awakens” works, often terrifically well, because Abrams (TV’s “Alias” and “Lost,” the excellent new “Star Trek” films) recaptures the one element Lucas left out of the second trilogy: the pop lightness that made the first “Star Wars” seem simultaneously eternal and effervescent. And he knows enough to hand chief duties for maintaining that tone to the actor who invented it: Harrison Ford, as Han Solo, wandering sardonically into the new movie like an aging graduate talked into one last high school reunion.

He’s wonderful, and the scenes between Han and his long-suffering copilot Chewbacca (Peter Mayhew, under the throw rug), have exactly the rancorous warmth we remember. We need someone in these movies not to take himself seriously if we’re to be invited in to play, and Abrams and his writers work hard at keeping “The Force Awakens” agile, even while building on the heavyweight mythos undergirding Lucas’s universe.

Of course the new movie has to sketch in the 3-D chessboard as it stands three or so decades after the events of “Return of the Jedi.” Luke Skywalker (Mark Hamill) has vanished after one of his Jedi trainees turned bad — guess which one? — and the Resistance needs to find him if the people of the embattled galactic Republic are to be rallied to fight what remains of the Empire, led by the shadowy Supreme Leader Snoke (embodied by Andy Serkis — Gollum himself) and a league of evildoers named the First Order. The Resistance is led by General Leia Organa (Carrie Fisher), and the reunion scene between her and Han is exactly as tart (for them) and as tearful (for us) as one would hope.

As expected, many Imperial Stormtroopers are on hand as faceless lunchmeat — is this the worst job in the galaxy, or what? — but one of them develops a face, a conscience, and a name. Finn (John Boyega), formerly FN-2187, joins the rebels after a village massacre in which he refuses to participate and which stands as one of the movie’s few tonal missteps. (We’re getting enough tragedies in the real world, thank you.)

Striking an alliance with Poe Dameron — Oscar Isaac, as the cockiest fighter pilot in the Resistance — Finn ends up hitting the interspatial road with Rey and BB-8, the two humans striking sparks in what Abrams very much hopes will be a repeat of the Han-Leia undercard.

Not quite, and only because Boyega’s Finn is the new movie’s one weak link, a character who vacillates between noble impulses and cowardice until our interest drops away. The performance is fine but it’s just fine, with little of the iconic bite a Wagnerian cartoon like this needs. (Of course, you could say the same thing about Hamill’s Luke Skywalker in the first “Star Wars.”)

Ridley, by contrast, makes Rey seem as if she’s always been here, and there are serio-comic grace notes among the supporting cast: Domhnall Gleeson as a liver-lipped enemy general (just the way he barks “Use the ventral cannons!” is good for a laugh), the voice and regal sensibility of Lupita Nyong’o behind the wizened digitized form of cantina owner Maz Kanata. The latter is the closest “The Force Awakens” comes to a Yoda figure; only the scrambled syntax is she lacking.

For those heavily invested in the ways these movies juggle high legend and ridiculous coincidence, there’s a fair amount of unfinished family business on the table. You may suspect one of these connections early on, but Abrams, to his credit, never comes out and says it. That rare sense of withholding — Lucas would have spelled it out in intergalactic skywriting — gives the final scene of “The Force Awakens” a jolt of genuine pop power.

The director, J.J. Abrams, recaptures the pop lightness that made the first ‘Star Wars’ seem simultaneously eternal and effervescent.

Elsewhere, in some of the weaker laugh lines and a few clumsy scene transitions, the new movie honors the B-movie roots of the first “Star Wars” all too well. But even those rough edges may add to the sense that we’re in good hands once more.

Abrams understands what George Lucas never quite figured out: that we’re less interested in the science fiction future than we are in revisiting the past. We don’t really want to see what happens next in that galaxy far, far away. We want to recapture what it felt like the first time we arrived, in 1977, with a movie called “Star Wars.”

We want to go home. “Star Wars: The Force Awakens” takes us there.